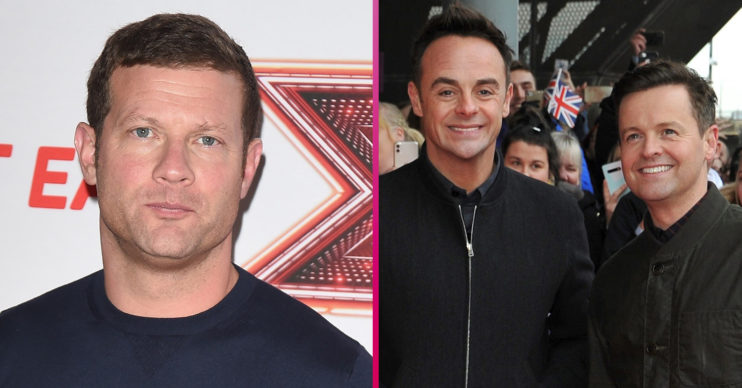 Dermot O’Leary delighted fans as he reunited with much-loved duo Ant and Dec.

The three presenters were pictured together in a sweet snap ahead of the Geordie pair’s book event, and celebration of 30 years in TV.

In an Instagram snap for his 652,000 followers, Dermot shared a heartwarming image of all three men laughing at the camera.

About to go live with these two rascals. In conversation Live stream @antanddec @faneproductions @princestrust Wish me luck.

Read more: EastEnders fans heartbroken over Chantelle’s hopes to escape ahead of her murder

He captioned the picture: “About to go live with these two rascals.

What did Dermot O’Leary fans say?

Fans were quick to gush over the snap. One commented: “Love this pic, 3 of my favourite boys”

Another said: “What a trio!” while a third added: “Triple trouble.”

Ant and Dec celebrate their 30 years in TV

The snap was posted after Ant McPartlin and Declan Donnelly enjoyed a special live stream to mark their 30 years in television.

The event was held at the London Palladium on Friday, September 11.

The Geordie duo both looked delighted as they posed for snaps with their fellow TV presenter Dermot.

However, all three kept to social distancing measures of staying apart before the chat, where they also spoke about Ant and Dec’s new book Once Upon A Tyne.

In addition, the pair spoke out about their recent appearances on ITV as Britain’s Got Talent returned.

Removing their protective face masks, Dec shared: “We don’t need these with each other. We’re in a cohort!”

Furthermore, Ant added: ‘We’re working on BGT and other things so we get tested every four or five days so.

Meanwhile, Dermot recently revealed he had items stolen from him.

Dermot had his wedding ring and other items stolen recently

He issued a heartfelt plea to fans as he revealed his wedding ring has been stolen.

The star was a victim of theft after his bag and wedding ring were stolen from a London gym.

The radio and TV presenter shared a tweet from the City of Westminster Police that asked for the public to help identify the man they believe responsible. However, Dermot is not optimistic.

Dermot, who retweeted the message, said: “Sadly this was my wedding ring and bag that was stolen.

“I’m sure I won’t see them again, but I’d really like it if he didn’t have the opportunity to steal yours.

“Please have a good look at the picture and if you recognise him call, 101 ref 6195/21aug Dx @MPSWestminster @metpoliceuk.”