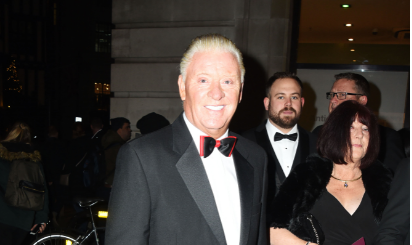 Says she will never forgive them

The widow of late celebrity medium Derek Acorah has hit out at a couple for hassling him while the star lay in a coma.

His wife of 24 years, Gwen, addressed the ‘hounding’ during her emotional announcement of Derek’s death.

She then turned her attention to the couple in question, branding them “vile” and warning that she would never “forget nor forgive”.

I have things to deal with now but I won’t forget nor will I forgive what you have done!

“To the vile couple who hounded him for responses to their ridiculous campaign whilst he was in intensive care in a coma, I hope you have the decency to hang your heads in shame.

The statement was shared on Derek’s official Facebook page.

Both Derek and Gwen had been sick with flu over the festive period, he explained to fans on social media.

He wrote: “Good morning everybody and I hope you’ve all had a spectacular celebration bringing in the new year and the new decade.

“I spent the time quietly at home with Gwen as we’ve both had the awful flu bug which has brought us down so low, hence the reason for my lack of live presence on Facebook.”

But he was hopeful that he would be able to get back to work in the new year.

“I hope to be back within the next couple of days when I will be giving messages from spirit for the new year,” the 69-year-old added.

“Have a wonderful day everybody and much love to you all! X (sic).”

Derek was born in Bootle, Merseyside, in January 1950.

He was best known for his television work on Most Haunted, which aired on Living TV (2002–2010); he also went on to present Derek Acorah’s Ghost Towns.

In November 2009, he featured in Michael Jackson: The Search for His Spirit where he attempted to contact the late singer’s ghost.

He also competed on Celebrity Big Brother in 2017 and finished in fourth place.