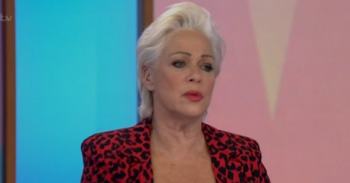 She spoke candidly about her mental health

Denise Welch has opened up about the terrifying episode she had at the weekend, as she suffered a panic attack live on stage.

The 60-year-old is currently starring in the theatre version of Calendar Girls and retold the scary moment she began to have an episode mid-performance.

Speaking on Loose Women today (11 March), she admitted that the experience left her in a “state” and she was fearful that she would forget her lines in the middle of the show.

Denise, who has previously spoken about her “clinical depression”, explained that she had been battling a virus and where she felt physically unwell, it had an effect on her mentally.

She added that she began to experience “heavy breathing” and was “tearful” as she tried to perform.

Denise continued: “I could feel the old horrors, I felt my heart racing and my throat closing up.

“There were a couple of people who noticed on stage, I’m grateful that the audience didn’t notice. I was in quite a distressed state. I was convinced I was going to forget (my lines) and that I was going to fall. I was in a state.”

Denise went on to reveal that she managed to go back on stage for the evening performance of Calendar Girls, but insisted that “nobody made” her go on.

She said that she was determined to beat her anxiety and confessed she used “every word under the sun” to swear at the anxious presence she felt and she eventually made it through her second performance.

Denise said she decided to speak out to help others who suffer with anxiety and panic attacks.

Her admission on Loose Women also inspired host Andrea McLean to open up.

The 49-year-old revealed that she too suffers with panic attacks and that just talking about them can “bring one on”.

Can you relate to Denise and Andrea’s stories? Leave us a comment on our Facebook page @EntertainmentDailyFix and let us know