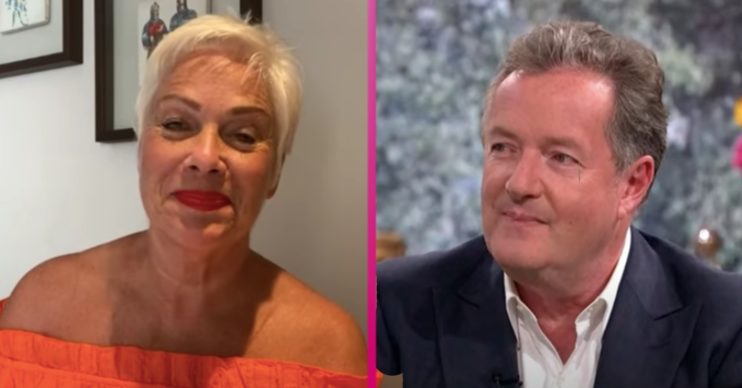 Denise Welch has joked that she wants to move to a ‘Portuguese commune’ following her row with Piers Morgan.

The Loose Women star came to blows with Piers on Friday (September 4, 2020) after sharing her controversial views on coronavirus.

During an impassioned appearance on This Morning, Denise argued that the media and government have overreacted regarding COVID-19.

She claims that they have been “scaremongering” and leaving many vulnerable.

But Piers was unimpressed and publicly slammed Denise’s beliefs as “dumb, deluded and dangerous”.

The row has rumbled on overnight, with other celebrities wading in, and now Denise has tweeted that she wants out.

This Morning’s resident psychologist Emma Kenny tweeted Denise, saying: “My mates just moved to a commune in Portugal…there are alternatives to the western model. Xx”

What did Denise Welch say on This Morning?

Viewers were left divided over Denise’s comments about Covid-19 on This Morning.

Denise said: “I noticed I didn’t see the other day when the news starts – bong! – nobody died in the UK because of corona-related illness.

“If you’re going to frighten us with how many people are dying every day, please enlighten us and tell us how things have improved.”

As the debate continued, Denise’s voice became more raised and she interrupted Dr Sara Kayat when she tried to speak.

This Morning host Eamonn Holmes was then forced to step in and tell Denise to “calm down”.

What did viewers think of Denise’s Covid-19 beliefs?

Viewers in the pro-Denise camp were quick to agree with her on Twitter.

One tweeted: “Denise Welch is so right…

“What’s the point in scaremongering everyone, people need to be safe but stop scaring everyone into thinking this situation isn’t getting better.

“Cases are up because they’re testing more but hospitalisations and ventilators are going down #thismorning.”

But others were quick to denounce Denise’s views.

One viewer said: “Nice to see world-renowned virologist Denise Welch of Loose Women schooling the nation on her peer-reviewed, cutting edge research she got from Reddit and Wiki. #ThisMorning.”

What did Piers Morgan say to Denise Welch?

Piers, who this week returned to Good Morning Britain following his summer break, was far from impressed.

“Her idiotic, ill-informed ramblings – from a woman who never stops telling us that she suffers from mental illness – will cost lives by persuading people to think the virus isn’t a threat.”

Dumb, deluded & dangerous Covid-deniers like Denise Welch need to stop being given airtime. Her idiotic, ill-informed ramblings – from a woman who never stops telling us that she suffers from mental illness – will cost lives by persuading people to think the virus isn’t a threat.

Piers was referring to Denise’s battle with anxiety and depression.

Denise’s Loose Women co-star Nadia Sawalha has since waded into the row, telling Piers not to be “personal”.

She tweeted: “Have the argument @piersmorgan… just don’t attack on such a personal level… Can you not be better than this? @RealDeniseWelch.”

Whose side are you on? Leave us a comment on our Facebook page @EntertainmentDailyFix and let us know.