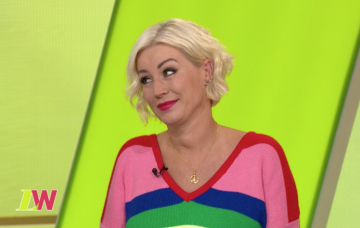 She was forced to give up a West End role

Denise Van Outen opened up about a devastating ankle injury that forced her to postpone a starring role on the West End, on Monday’s episode of Loose Women.

Appearing as a pale member, Denise walked onto the set with her left foot encased in a supportive boot and had to be helped onto the stage by Ruth Langsford.

As soon as the show got going, Ruth turned to Denise to ask her about her injury – which forced her to push back a planned role in the West End’s revived production of Chicago.

Denise explained that she’d hurt her foot while training for the show – before she even saw the inside of the rehearsal room.

“So there I was – I was going into Chicago in the West End, very excited, training really hard,” she said. “The part was going to play was Velma, which is all singing all dancing, and I just wanted to be super fit.”

She said that she was in the middle of an uphill run when she felt a sudden pain through the back of her heel – and scans later that day revealed it to be a fracture.

“I was running and I felt this shooting pain through my heel,” she said. “They did the MRI scan and I’ve got a stress fracture right through the heel.”

She shared a picture of the X-ray to show her fellow panel members just how severe the injury is.

Jane Moore quipped that it was a good reason to stay away from exercise, telling Denise:  “This has always been my theory though. Exercise is dangerous.”

Denise said that realising she’d have to postpone appearing in Chicago was devastating, but that she would appear later in the show’s run.

“I literally sat indoors and cried for three days, it was awful,” she said.

Denise previously appeared in Chicago in 2001 and 2002 both in the West End and on Broadway, playing the role of Roxie Hart.

Were you planning on seeing Denise in Chicago? Leave us a comment on our Facebook page @EntertainmentDailyFix and let us know what you think!