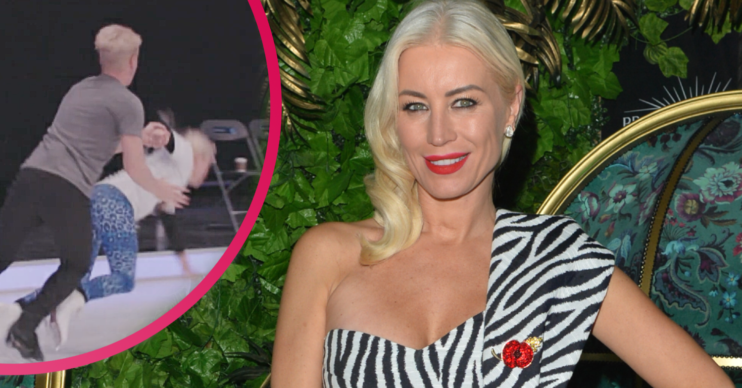 Denise van Outen has revealed that comments made by Ashley Banjo on Dancing On Ice left her “deflated”.

The 46-year-old star broke her shoulder during the skating competition and has now revealed the full extent of her pain.

Denise sustained her shoulder injury during training with her pro partner, Matt Evers.

What did Denise van Outen say about Dancing On Ice?

The horrendous injury happened during rehearsals with Matt ahead of her first live performance.

However, Denise gritted it out and went on to perform on the show.

But after her routine, she received harsh comments from judge Ashley.

She told The Sun newspaper: “I did feel deflated and really upset after Ashley said I needed to up my game.

“[I] thought, ‘How can I up my game with a fractured shoulder?’ I still haven’t been able to watch the routine as it makes me wince.

She added: “I skated off shaking and vomited because I felt in so much pain. I have no idea how I skated after my injury, it was so painful.

Denise was ‘gutted’ to have left the show

After finding out she had not only dislocated her shoulder but also sustained three fractures, Denise took to Instagram to tell fans she was quitting the show.

In a lengthy message, she told fans: “GUTTED! If you’ve been watching @dancingonice you will be aware that just over a week ago I had a nasty fall and injured my shoulder.

I’ve tried as hard as I can to carry on because I love the show and the amazing team in front and behind the cameras.

“I managed to skate my first dance with @themattevers on the live show through a gritted smile because the pain was unbearable.

“I’ve tried as hard as I can to carry on because I love the show and the amazing team in front and behind the cameras.”

No lifts for Denise

She continued: “Initially we thought with rest I could make a return to the ice, but a recent MRI scan has shown that I have three bone fractures as well as a partial dislocation.

“OUCH! No wonder I’ve been in agony.

“I won’t be able to do any lifts, tricks or solo skating on the show due to my injury. I’m going to bail out gracefully with my DOI bling sling.