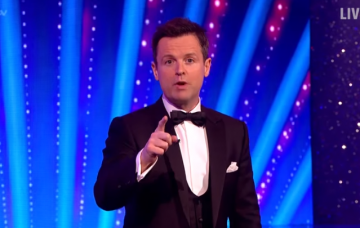 The programme has named Denise as the Special Guest Announcer for this weekend’s final episode, broadcasting live from Florida.

Denise, 47, is best known for appearing in movies such as Wild Things, Starship Troopers and James Bond’s The World Is Not Enough.

The star – who was previously married to Charlie Sheen – also appeared in Love Actually, Friends, as Ross and Monica’s cousin, and had her own reality show called Denise Richards: It’s Complicated.

His telly partner Ant McPartlin has stepped down from current TV commitments, leaving Dec to front the last two episodes of Saturday Night Takeaway by himself.

Dec will be joined in Florida by Saturday Night Takeaway regulars Scarlett Moffatt and Stephen Mulhern, who flew out to Orlando with a plane of competition winners on Tuesday.

All series, the show has been giving away tickets for a family holiday in Orlando, along with passes to watch the finale being filmed.

Ant, 42, has stepped down from TV work and returned to treatment after being charged with drink-driving in March.

Dec didn’t explicitly address his long-time pal’s absence during the episode, but joked he had “twice the amount of work to do”, and at one point said: “I’ll have to do it myself, like everything else this week.”

He thanked everyone for their support just before the programme ended.

The programme was a ratings success, watched by 7.7 million viewers with a 39% share of the audience, ITV has said. The show peaked with 8.6 million viewers.