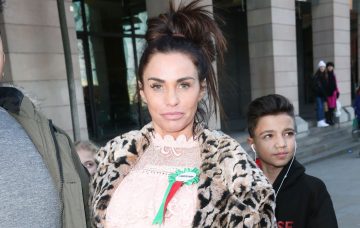 Things just got an extra level of awkward

Do you remember the drama last year, when Love Island’s Chris Hughes got into a war of words with Katie Price over some, er, texts?

Loose Women star Katie has confirmed that she is “delighted” after Chris’ ex-girlfriend, Olivia Attwood hinted he DID message the mum-of-five.

Her rep told Mirror Online: “She is delighted the truth is out. As Katie always says, the truth always comes out in the end – she doesn’t lie.”

The controversy started last year, when Chris, 25, publicly shamed Katie, 39, accusing her of trying to flirt with him behind his then-girlfriend Olivia’s back. He claimed he’d never replied to her messages, which Katie – married to Kieran Hayler – said was a lie.

Things got very heated with Pricey calling Chris “pathetic” and even reportedly heckling him at the ITV Gala, screaming out “text messages!” when he appeared on stage.

At the time, Olivia, 26, stood by her man, calling Katie “delusional”.

But now the Love Island star has hinted her ex DID message Katie, in an interview with Tuesday’s OK! magazine.

She said: “I chose to stand by him at that time. I had known him for two months, how am I to know what he was doing? All I know is that whether he did or he didn’t, he didn’t sleep with her, it was just a couple of messages.”

The TV star also said he was annoyed with herself for being too loyal, saying: “Yes, I do feel like I stood by him through a lot of things which weren’t great and that I probably shouldn’t have let slide, but I did.

“When I have slipped up and done something a bit stupid he’s jumped on it and been like: ‘It’s unacceptable’.”

But then Olivia tweeted on Monday, after the headlines hit, writing: “Keep seeing my words twisted constantly. Draining to say the least 😪.”

Hmm… what does that mean? That Chris DIDN’T reply to Katie?!

And on Monday night, Chris tweeted a cryptic message, saying: “You know it actually does shock/upset me how much [bleep] people can speak in this industry. It’s actually just vile.”

He then added a cute picture of himself holding a puppy, writing: “Tonight ✨🐶.”

Fans responded with a mix of sympathy and tough love.

One wrote: “That’s what you signed up for my friend.” Another added: “Are you OK?”

Last October, The Sun claimed to have “52 screenshots” of messages Chris sent Katie over Snapchat.

In one, they claimed he wrote: “Olivia just loves all the media attention and me personally hate it sometimes its too much.”

In an interview at the time, Olivia said: “Katie was a bit delusional to think Chris would fancy her or cheat on me. Chris is the first guy I’ve ever dated who I have no reason to be insecure with.”

Chris later ranted on Twitter: “I couldn’t give a [bleep] who I offend anymore. I stand on my own and always will. I don’t need people to get me.

“Katie Price you’re a piece of rotten [bleep]. I couldn’t give a [bleep] about you. Be a mother, be something respectful for everyone’s sake.

“I showed your true colours, you couldn’t live with it. You have 52 screenshots on Snapchat since I humiliated you? Comical.

“I’ve got my whole account history from Snapchat and media lawyer will [bleep] you up. No one deserves your [bleep], and I ain’t one to take it.

“You [bleep] lives. You have MY number, you can see I haven’t sent you [bleep]. You’re washed up and you stink.”

Katie, mum of Harvey, Junior, Princess, Jett and Bunny retaliated to OK!, saying that Chris is “trying to make me feel mental. For someone who has only had five minutes of fame and only has two and a half minutes left, they should pipe down.”

He then insisted to OK! mag: “She’s said that I sent the messages on Snapchat and while you can’t change your actual username on Snapchat, you can edit your display name.

“All someone has to do is go into their settings and change the name to look like the messages are from me.”

We’re saying nothing. Except maybe: eep.

Has Katie been vindicated? Leave us a comment on our Facebook page @EntertainmentDailyFix and let us know what you think!