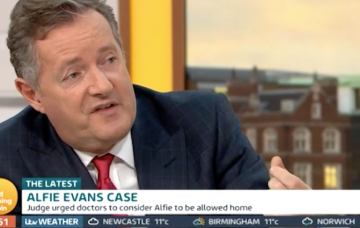 Tragic toddler has had his life support turned off

A debate over little Alfie Evans on Good Morning Britain turned passionate when Piers Morgan backed the parents in their battle to keep the boy alive.

The host said “miracles do happen” and insisted Tom Evans and Kate James should have the final say, despite the High Court ruling the child cannot be flown to Italy for treatment.

Alfie was taken off life support on Monday, but the couple have been giving him mouth-to-mouth resuscitation to keep him alive.

On today’s ITV breakfast show, Piers and resident medical expert Dr Hilary Jones disagreed about whether doctors or the parents should have the final say on Alfie’s treatment.

Father-of-four Piers said: “There comes a point where obviously this boy is going to die. This is the tragic reality of the situation.

“At that point, is it not the humane thing, at the very least, to let these parents take this little boy home and let him die in their arms at home?

“If it had been my child ultimately in this situation, I would want to have the final say, and I would be very angry that the state appears to be conspiring against that.

“Miracles do happen. Sometimes the doctors just get it wrong.”

“A whole panel of doctors say it is in the best interests of the child for the child to stay in hospital.”

Piers added: “Tom and Kate, Alfie’s parents, want the final choice in what happens to their little boy.

“Why should they not be allowed that? Shouldn’t love be the ultimate way?

Dr Hilary said: “Real love means letting go and not being concerned about your own emotions and feelings, and doing what’s best for your child.”

Debate over the critically ill, 23-month-old toddler, who has been treated in Liverpool’s Alder Hey Hospital,  has raged between those who support the parents’ stance and others who claim keeping him alive is “cruel” when doctors have given him zero chance of recovery.

Three court of appeal judges this afternoon rejected Tom and Kate’s appeal against the High Court ruling that stops them taking Alfie to Rome for treatment.

* Good Morning Britain is on ITV at 6am weekdays.

Do you agree with Piers? Leave us a comment on our Facebook page @EntertainmentDailyFix and let us know what you think!