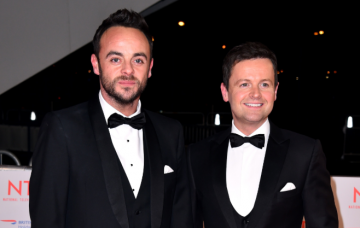 Declan Donnelly has sent a birthday message to Ant McPartlin, who is missing marking the day in Australia for the first time in years while absent from I’m A Celebrity… Get Me Out Of Here!.

Dec shared a picture of himself and Ant dressed as characters from The Simpsons – he as Marge, and Ant as Homer – on social media hours before the new series kicks off.

Ant, 43, is usually Down Under with his long-time presenting partner and best friend to celebrate his birthday, as the programme coincides with the late November date.

This is the first series of the ITV reality show that Ant has not hosted since it began in 2002, as he takes time away from TV commitments following a drink-driving conviction.

Holly Willoughby is joining Dec as co-presenter for the new series, which will see the likes of football boss Harry Redknapp, DIY SOS host Nick Knowles, ex-EastEnders star Rita Simons and entertainer and actor John Barrowman compete to be crowned King or Queen of the Jungle.

Shortly after his birthday message to Ant, Dec tweeted fans that he was heading to bed before an early wake-up call to host the first episode.

Read more: Dec and Holly head to meet celebs in a speedboat

He wrote, adding an emoji of the Australian flag: “Bedtime in Oz. Can’t wait to welcome you here later.”

I’m A Celebrity starts at 9pm on Sunday on ITV.

How much are you going to miss Ant on I’m A Celebrity?