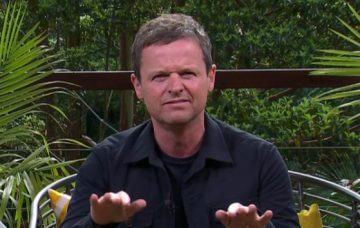 Reports claimed he was going it alone

The TV star was believed to be rebranding as “Declan” without his long-time telly partner Ant McPartlin, according to reports.

But Ant and Dec fans will be relieved to hear there is no truth in the rumours after Dec told friends it was completely false.

Suspicions that the 43-year-old would be going it alone were sparked with a curiously worded advert for Britain’s Got Talent audience tickets.

Not only was there no mention of Ant, who is continuing to take a break from TV to focus on personal issues after a drink-drive conviction, but it appeared to suggest Dec would rebrand simply as “Declan”.

But sources close to the pair told the Mirror Online that the idea of them splitting up permanently was “total nonsense”.

They said: “There is no rebrand of Dec as a solo act, he is very much looking forward to working with Ant again in 2019.”

Echoing those sentiments, an ITV source confirmed the thought of Dec going solo was “nonsense”.

Holly Willoughby is currently filling in for Ant hosting I’m A Celebrity alongside Dec in Australia.

Dec presented a TV show without Ant for the first time earlier this year on Saturday Night Takeaway, as his best friend started his extended break to recover.

* I’m A Celebrity… Get Me Out Of Here begins tonight at 9pm on ITV.

Are you looking forward to Dec reuniting with Ant? Leave us a comment on our Facebook page @EntertainmentDailyFix and let us know what you think!