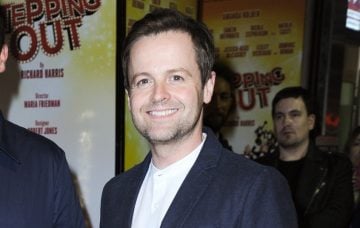 This is bringing back fond childhood memories!

Dec Donnelly has shared a sweet throwback snap from SM:TV Live to mark 20 years since it first aired.

The Britain’s Got Talent host took to Instagram on Wednesday to post a photo of himself, Ant McPartlin and Cat Deeley on set of the Saturday morning children’s television programme when they were younger.

In the picture, both Ant and Dec sported similar spiky hairdos while a fresh-faced Cat beamed for the camera between the duo.

Dec wrote: “20 years ago today, on August 29th 1998, #smtvlive and #cduk appeared on our tellyboxes for the first time.

Fans loved the throwback pic with one person reminiscing: “So many great memories!”

Another said: “My childhood…. loved Saturday mornings!” while a third wrote: “Those were the days! SM:TV was the best!”

Readers of a certain age will have fond memories of tuning in to SM:TV Live on a Saturday morning, back in the late 1990s/early 2000s.

Featuring brilliant sketches and the irresistible banter that made Ant and Dec the kings of Saturday telly, SM:TV Live became a treasured hit.

Last year, it was confirmed the show would be returning for a one-off special to celebrate its 20th anniversary.

Earlier this year, Ant told the Radio Times: “We can tell you it’s happening, it’s definitely happening, I’m on board, Dec’s on board, Cat’s on board.

Dec added: “We’re starting to put the little nuts and bolts together, it’s very exciting, it looks like it’ll be probably about September time.”

However, in March, it was reported that the one-off special would be postponed until 2019.

In the meantime, viewers will get to see Dec back on our screens for this year’s I’m A Celebrity… Get Me Out Of Here! alongside his new co-host Holly Willoughby.

Ant, meanwhile, is taking the rest of the year off to focus on his recovery following his stint in rehab for drink issues and painkiller addiction and his drink-drive arrest in March.

Are you looking forward to the SM:TV Live one-off special? Let us know what you think by leaving us a comment on our Facebook page @EntertainmentDailyFix!