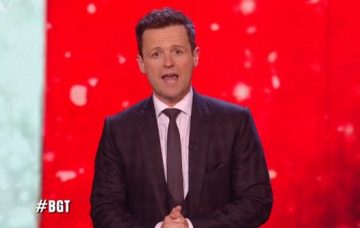 Dec gets special visitor backstage at Britain’s Got Talent

BGT went live for the semi-finals on Monday night

Declan Donnelly has revealed he got “moral support” from his beloved dog ahead of the Britain’s Got Talent live shows.

The 42-year-old hosted BGT solo for the first time on Monday night, as telly partner Ant McPartlin, also 42, continues to take a break from TV commitments.

But he wasn’t alone! Dec took to Instagram to reveal his beautiful pup Rocky was backstage to support him.

Alongside a sweet pic, he told fans: “Rocky has come to keep me company and show moral support as I’ll be on my own tonight, although I’m getting the feeling he’s not as excited about the start of the @bgt semi finals as I am! 🐶.”

Dec was widely praised by fans – and celebrity pals! – for his presenting skills on the stage alone.

Among them was Phillip Schofield, who told him: “You were brilliant… obvs.”

BGT judge David Walliams also praised Dec for hosting Britain’s Got Talent alone, as comedian Lost Voice Guy and singers The D-Day Darlings made it through to the final of the show.

Speaking during the results show, David told Dec he had done “a magnificent job”.

Dec opened the first live semi-final by descending onto the stage from the ceiling sitting in a hoop. He told the audience and viewers that nothing had changed, with the same judges and format, then quipped: “And the presenters… well, probably best not to dwell on that.”

Unfortunately, technical problems caused by the weather disrupted the broadcast from the Hammersmith Apollo for several minutes.

Despite the glitch, Dec’s calm attitude under pressure won him praise from fans, who tweeted that he was “smashing it”.

The BGT team were also impressed with the way Dec hosted without Ant, with David saying during the results show: “I wanted to say that you did a magnificent job tonight.”

“You are a super cool guy,” he added, as fellow panellists Alesha Dixon, Amanda Holden and Simon Cowell smiled and clapped.

The episode saw the first crop of hopefuls trying to win a place in the final.

Comedian Lost Voice Guy won the round, being voted through to the final by the public. Singers The D-Day Darlings and magician Maddox Dixon landed the next highest number of votes and the judges had to pick which one would go through.

They chose The D-Day Darlings, who will now join Lost Voice Guy in the final.

Meanwhile, Ant continues to take time away from the spotlight following a drink-drive incident in March.

He’s stepped down from current TV commitments, which meant Dec also hosted the last two episodes of Saturday Night Takeaway solo. Ant appeared in the auditions episodes of BGT as they were pre-recorded earlier in the year.