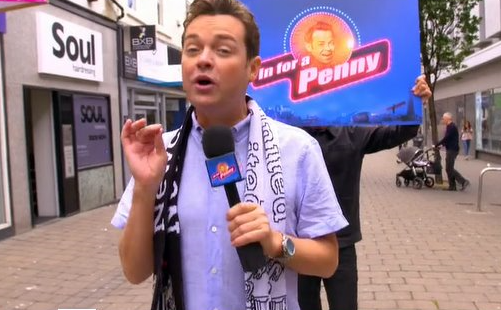 Presenter Stephen Mulhern had a rather awkward exchange with Declan Donnelly‘s mum on his show In For A Penny.

The TV host bumped into Dec’s mum Ann when looking for members of the public to play his game show.

Stephen, 42, was roaming the streets of Newcastle to find willing contestants.

Excited to see the Britain’s Got Talent presenter’s mother, Stephen managed to get her to play along.

But he ended up having a jokey rant at Ann, because she didn’t have a penny on her!

The show sees Stephen rope in members of the public on the street, who offer up a penny to play and try to win cash.

Stephen told viewers: “You’re not going to believe who I have just met. This is Ann, Dec’s mum!”

Stephen then asked the famous star’s mum if she had a penny to play and she began searching in her purse.

But poor Ann was caught short.

“No, I don’t have a penny,” she revealed, which caused Stephen to have a bit of a rant.

“Are you serious? Dec’s going to go off his nut!” he exclaimed and then stormed off camera.

Luckily, Ann saw the funny side and laughed as Stephen walked away.

Read more: Ant and Dec secretly auditioned for Britain’s Got Talent in disguise

To see what happened after the funny moment, tune in to the show this Saturday.

In For A Penny is on Saturdays at 7.30pm on ITV