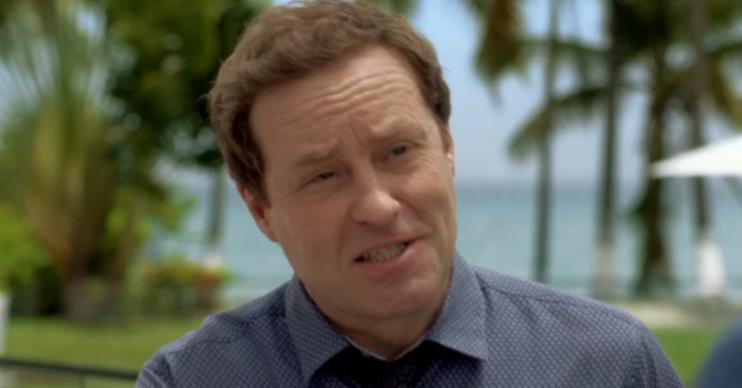 Fans of the BBC’s popular crime drama Death in Paradise were fuming last night after the broadcaster chose to air an old episode at 9pm.

BBC One showed the first episode of season seven on Monday (June 3) and angry viewers accused the channel of ‘raising their hopes’, with some branding it ‘disappointing’ and even ‘disgusting’.

Read more: Death in Paradise viewers slam show for loss of Dwayne Myers and call it the ‘last straw’

Fans took to Twitter to blast the Beeb’s decision to air a repeat.

Another said: “@BBCOne why are you raising my hopes up with new #deathinparadise only to show an old series?”

A third tweeted: “So disappointed!”

Someone else wrote back: “I know, right? Had my glass of wine ready, cat by my side woop, woop and then… yeah, I’ll just go to sleep.”

A fifth fumed: “Soooo @bbc please explain why we pay you a fortune every year in licence fees and get reruns of #deathinparadise at the 9pm slot? Is this your way of recouping the #easterners scenery screw up? Why not just sack those responsible and give us new stuff? #disgusting.” 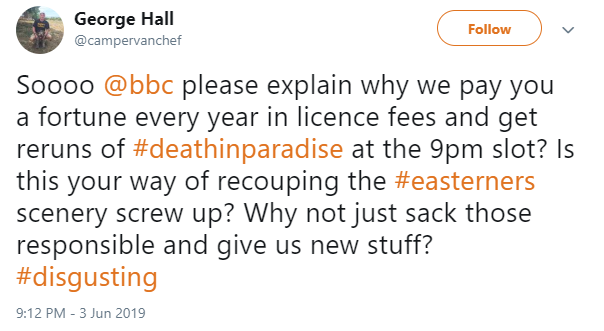 Luckily for fans of the show, Death in Paradise is set to return for not one, but another two series.

After the success of season eight, which boasted a consolidated audience of 8.9 million people for its premiere episode, filming is getting underway once again in Guadaloupe.

The BBC’s Drama Commissioning Editor, Tommy Bulfin, said in a statement: “We are delighted to announce that Death in Paradise is coming back to BBC1. The show is a jewel in our roster of top drama and we are thrilled that it’s returning.”

Tim Key, executive producer at the company behind the show, Red Planet Pictures, commented: “We’re excited to let the audience get to know our new characters better whilst also throwing some major surprises into the mix along the way – and of course solving the odd murder or 16.”

Speaking further, he said the show’s crew is “thrilled” to be back in the Caribbean for filming, adding: “We can’t wait for the audience to see what we’ve got in store for series nine – there are some big surprises coming.”

Series eight finished in February and the new series’ air date is yet to be announced. But Death in Paradise typically starts in January, which means fans will likely get series nine in January 2020.

Are you a fan of Death in Paradise? Leave us a comment on our Facebook page @EntertainmentDailyFix and let us know.