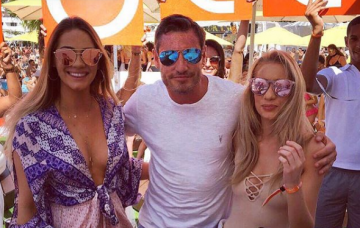 EastEnders actor is not a Love Island fan!

His EastEnders co-star Danny Dyer’s daughter is currently on Love Island but Dean Gaffney has said he’d never let his twin girls do the same.

The 40-year-old, who plays Robbie Jackson on Albert Square, has said he’s not a fan of the ITV2 show and would hate to see his daughters, Charlotte and Chloe, 22, on it.

He told the Daily Star Sunday: “They’ve been approached by Love Island but I don’t want them doing stuff like that.

“I think anyone that goes on a reality show to open their legs and have sex on telly hasn’t been brought up well in my opinion. It’s not right and I certainly don’t want to have my daughters on that.”

Dean, who has previously appeared on I’m A Celebrity, said he’s pleased his daughters are pursuing careers in PR and marketing rather than chasing fame.

He said he’s glad working outside the spotlight means his girls are less likely to be targetted by online trolls.

The actor said: “People can be so abusive online. The thing about this country is no one wants you to do well. There are a lot of people out there who are jealous and it is horrible.”

Last month he shared a throwback snap of himself with his daughters as little girls alongside one of them today, writing: “I probably don’t tell you pair this enough but I love you very much and I’m incredibly proud of you both. PS: Would be nice if I saw you before 2k19.”

Read more: Love Island’s Rosie Williams Q&A: ‘Adam should have been dumped instead’

Dean’s comments about Love Island might not go down too well with his EastEnders co-star, Danny, 40, whose daughter Dani, 21, is currently on the hit show.

She’s an aspiring actress and previously had a brief stint on the show Survival Of The Fittest, before having to pull out with an injury.

Dani has been coupled up with Jack Fincham since the start of Love Island and their relationship has been going from strength to strength.

Although they have to share a bed each night, Dani has said they are keeping their relations strictly “PG”. They haven’t done more than kiss – unlike their fellow islanders Eyal Booker and Megan Barton Hanson who admitted they had sex in the hideaway last week.

Dani’s mum, Jo Mas, previously told The Mirror she would “go ballistic” and smack her daughter’s bum if she did have sex on TV.

Both she and her actor husband, Danny, have been proud of how Dani has acquitted herself on the show so far, becoming a good friend to the girls and developing a sweet relationship with Jack.

Danny has joked on Instagram that he needs to parachute into the Majorcan villa to meet the man who has stolen his daughter’s heart.

“On me way to have a couple of cheeky tequilas with some slice of a geezer called Jack,” he wrote.

He’s also said how proud he is of Dani with another jokey message alongside a picture of himself with his youngest daughter, Sunni, 11.

“Me and the Wife have come to accept the fact that we was put on the planet to reproduce Love Islanders… oh well…embrace it….good luck in 2028 Sunnie….. #doubledoubleproud #TeamDani,” he wrote.

Dani and Jack’s relationship could be tested this week as it’s been reported one of his exes could be entering the villa.