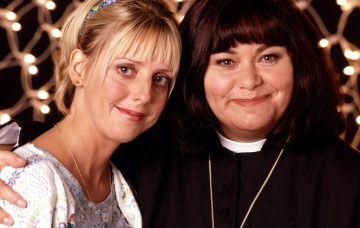 Dawn French has said she is still in shock over the death of her Vicar Of Dibley co-star Emma Chambers.

The actress – who portrayed the dim but lovable Alice Tinker opposite Dawn’s Geraldine Granger in the long-running BBC comedy – died of natural causes in February, aged 53.

Dawn told ITV’s Lorraine: “This has been a very shocking and sad loss. Far too young, and I think we’re all still reeling a little bit from it.

“My memories of working with Emma are some of my most favourite memories of my whole career.

“She’s a massively diligent person, much unlike Alice. She was incredibly bright. Very funny, very knowing, and yet she was able to play someone who was in a different world.

“She didn’t play a simpleton, she played someone who had a different reality. She was incredibly authentic at that and I will miss that.”

Dawn added: “To play a clown in a way like that, it takes a lot of hard work. You have to learn things very particularly. She did it really well, really well.”

The Vicar Of Dibley originally ran from 1994 to 1998, but returned for numerous festive and comic relief specials with the latest episode airing as recently as 2015.

Each episode would close with Geraldine telling a joke to Alice who would either react nonplussed, interpret it literally, or only understand the humour once it was explained.

I was regularly humped like this by the unique & beautiful spark that was Emma Chambers. I never minded. I loved her. A lot . pic.twitter.com/imzkoyKja9

Dawn was among the colleagues who paid tribute to Emma following the tragic news of her death in February, telling Press Association: “Emma was a very bright spark and the most loyal and loving friend anyone could wish for.

“I will miss her very much.”

Recalling their characters’ close friendship, Dawn shared a photo to social media showing Alice lying on top of Geraldine in a shot from the popular series.

She wrote on Twitter: “I was regularly humped like this by the unique & beautiful spark that was Emma Chambers. I never minded. I loved her. A lot.”

Jon Plowman, executive producer of The Vicar Of Dibley and former head of comedy at the BBC, said: “This is a sad day. Emma was a gifted comic actress who made any part she played – no matter how ditzy or other worldly – look easy.

“To create a much-loved comic character as she did, you have to be every bit as bright and clever as Emma always was.

“She was great fun to work with and adored by all the cast and crew of Vicar Of Dibley. She will be missed and our deepest condolences go out to her family and friends.”