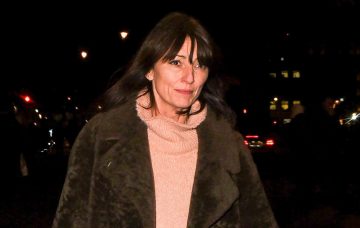 She lost her sister Caroline to cancer in 2012

In a new interview with The Mail On Sunday, the television presenter describes missing the signs of the illness as “the great regret of my life”.

Davina said the diagnosis came out of the blue for the family; even the fact Caroline was a smoker and had a cough hadn’t seemed like warning signs.

“The thing I do kick myself a lot for is not noticing the signs,” she said.

“Like the weight loss – which thrilled her. Or the fact that she was getting quite clumsy, which we now know is because her peripheral vision had disappeared. The pain in her neck we thought was from a fall she’d had in the garden.

“Now I know these were all signs. I wish I’d known that then. Of course I look back and wonder if I could have done something differently. It’s the great regret of my life.”

In 2012, Davina called an ambulance when Caroline collapsed at her home next door, from what Davina suspected to be a stroke.

After several tests, Caroline was heartbreakingly diagnosed with terminal cancer, which had first started in her lungs, but had spread to her bones and brain.

At just 50 years old, Caroline died surrounded by her family.

Now, Davina is hosting an ITV special from the NHS front lines, during which she experiences the daily goings-on from everywhere from the Leeds Dispatch Centre, to the A&E department at the Leeds General Infirmary.

The TV presenter is determined to highlight the wonderful work of the NHS, and to meet the brave people who are faced with tragedy every day.

Davina previously spoke about her sister’s bravery and courage during an emotional interview on This Morning.

She told Holly Willoughby and Phillip Schofield: “She was unbelievable… her bravery in dying.

“There was something about her willingness to say, ‘I know this is going to happen and I’m not going to freak out and fight it the whole way and make you all really upset with my fear.’

“I know she was doing it for us. She was so brave. I would see her pull it out of the bag for her friends when she was absolutely exhausted, to make them feel better.

Davina herself turned 50 last month, and recently reflected on the difficult times as helping her to become the woman she is today.

She told Red magazine, “When I think of all the things that happened, with my mum and my childhood, and the drugs and the alcohol, and my sister dying, and I got through all of that.

“All of those things make you think, ‘Throw anything at me. I’ll be OK.'”

A&E Live is on Tuesday, Wednesday and Thursday, starting on May 22 at 9pm on ITV

Will you be tuning into Davina’s new show? Is the presenter an inspiration to you? Leave is a comment on our Facebook page @EntertainmentDailyFix and let us know what you think!