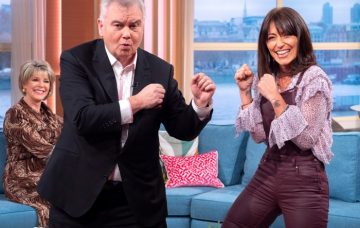 Davina McCall reveals she was trolled for dying her hair

Davina has been the recipient of some pretty weird trolls!

Davina McCall is probably one of the most likeable TV presenters we know but, like all celebrities, she is no stranger to trolls.

Those pesky bullies who hide behind the anonymity of their social media accounts often target stars for all manner of things, including being too ‘skinny’, too ‘old’ or simply for having an opinion – and Davina has been abused for all that and more.

But today the Long Lost Family presenter revealed one of the weirdest things she has ever been criticised for!

Read more: Davina McCall slams trolls who call her ‘too skinny’ and ‘wrinkly’

Appearing on This Morning today (Friday, January 4), Davina spoke with hosts Eamonn Holmes and Ruth Langsford about her relationship with social media and about the time she angered her followers by having her hair dyed!

She said: “I posted something where I was colouring my hair at home and I got a massive tirade of people saying I was putting hairdressers out of business by using home hair colour.

“And I was like, literally, my two sons and my daughter are keeping the hairdressing industry in business… I go to the high street to get their hair cut all the time.”

The 51-year-old former drug addict also revealed that she struggles to ignore trolls, adding: “I guess I find it really hard to sit back… What I love about social media is that you can respond to things in your own way.

“It’s a good thing and also a bad thing. There are times where I think I want to respond, and I’m not going to. That’s quite hard, I have to sit on my hands.

“Sometimes [things online] can become ‘a thing’ and I didn’t mean it to become ‘a whole thing’, but I do think it’s ridiculous sometimes.”

Yay you lucky people … it’s dvd time ( Boxing Day #powerboxandtone ) which can only mean one thing. Gratuitous pictures of me in a bikini … Dont care what you think 😂😂👍🏻 I feel good in my skin. And leading a healthy life is a huge part of why I feel body positive. I don’t judge anyone for the life they choose or the shape they are . Life is too frickin short … if you hate all of this stuff then seriously unfollow me. But if you are shy Lycra wearer or a new mum or just really struggle getting out of the house or just need to crack out 10 mins quickly before work ( I did morning gratitude this am and then abs and arms….) then download the dvd. I do it all the time … short workouts .. or 1 long one if u fancy a challenge🙌🏻 hugs this Christmas 🎄 you are lovely 😊 and you @sarahblendfit are particularly lovely … thank you for being part of my life . ❤️

On those who often critique her figure as too thin or call her a bad role model, Davina said: “I don’t care what other people say about that because, if I believe I was a bad role model, I’d try and change what I was doing.

“So change it and become a good one. Everybody’s going to have an opinion and I try not to read it too much. I just think ‘I’m going to post this, because I’m 51 and feel in good shape’. I know from looking at other people’s Instagrams; I follow people to be inspired, I don’t follow people to troll them.”

Davina, who has just released her 15th fitness DVD, admitted that like many others she DID overeat this Christmas and still struggles with her addictive personality.

She said: “Do I overeat at Christmas? Yes. I always fall off the sugar wagon… I’m terrible, it’s ugly. Let’s not forget, I am a recovering addict, so I don’t take one of anything!

“When I start the sweets, I am off and it becomes ugly! But I don’t want new year resolutions to be a thing of punishment. I always think that the new year is an opportunity to have a clean slate. And I’ve found boxing is a really fun way to exercise.”

She added: “I exercise maybe three or four times a week, but I will do an hour at a time and it’s quite hard core.”

Davina also revealed she was still single after splitting from her husband Matt Robertson in 2017, after 17 years of marriage.