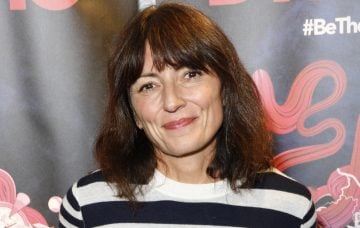 Blast from the past!

She wished a happy birthday to 17-year-old Holly yesterday, sharing a picture of one of her iconic “Big Mutha” t-shirts, carefully framed.

Then this morning she shared a post for her second daughter, showing an image of a t-shirt mounted to show the back – which read “Reloaded.”

Said “Happy birthday to Big Mutha no 2, My beautiful Tilly!!!”

It was captioned “Very busy weekend 😂😂”

All three of Davina’s children have birthdays in September – something that she planned when she was hosting Big Brother.

When she appeared on Desert Island Discs back in 2016, she told host Kirsty Young that she planned her pregnancies around the reality TV show – because she didn’t want to watch someone else present it.

Read more: Son of Strictly Come Dancing presenter is “appalled” she gets naked around the home

“I love Big Brother so much and the idea of someone else presenting it was ‘over my dead body,’ she said, so I said to Matthew, ‘We are not trying for a baby until after December so there we are, three birthdays in September.”

When the show moved from Channel 4 to Channel 5 in 2011, she decided to move on.

What do you think of the Big Mutha t-shirts? Leave us a comment on our Facebook page @EntertainmentDailyFix and let us know what you think!