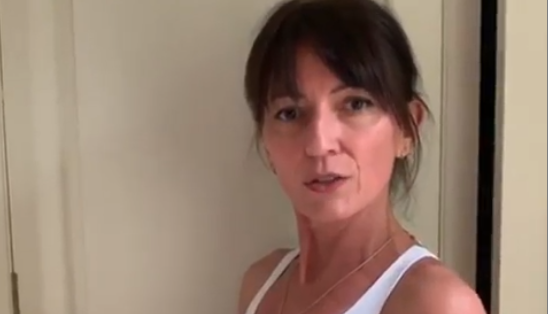 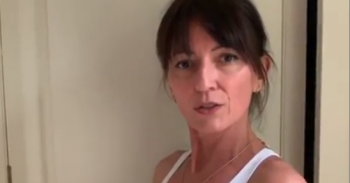 She said her friend challenged her to do it

Davina McCall pranced around in her underwear and made strange faces for fans in a fun and slightly bizarre clip posted on social media.

The presenter, 51, took to Instagram to share a video of herself goofing around with a friend, jumping on a bed and dancing while boldly chanting “I don’t care what they think about me!”

Oh my goodness…. I’m in a very happy place right now. With an effervescent ball of positive energy @chessiekingg 💖💖❤️❤️💖💖 she’s been inspiring my girls and all of their friends for an age and thanks to them… we are hanging out this avo . Chessie posted an « I don’t care what they think about me « vid.. and challenged me to do one ( it wasn’t really a challenge… I really wanted to do it) so she’s helped me do mine today … had a blast 😂😂 and am feeling wildly liberated! #growingolddisgracefully

In the caption, she told her followers she’s in “a very happy place right now” and called her friend, Chessie, “an effervescent ball of positive energy”.

She wrote: “She’s been inspiring my girls and all of their friends for an age and thanks to them… we are hanging out this avo.”

Offering something of an explanation for the upload, Davina said: “Chessie posted an ‘I don’t care what they think about me’ vid… and challenged me to do one.”

She also said that she “had a blast” creating the clip and now feels “wildly liberated”.

Read more: Davina McCall reveals she was trolled for dying her hair

The post also sees her touching her face and nose in profile and asking, in a serious voice: “Are you a member of the pelican family?”

Elsewhere, she peered closely into the camera and said: “Bizarre facial expression of the week, Davina McCall!”

In another part of the clip, she sucked her cheeks in and said: “Oh your cheeks are sunken into your face, go and buy some doughnuts.”

Fans thought the video was brilliant, with one commenting: “This is fab and slightly bonkers. Huzzah for not caring what others think.”

Another added: “Bonkers and beautiful!” while a third said “What a nutter!”

Even if it was a bit bizarre, Davina nevertheless impressed with her slender, toned physique – something she was recently forced to defend against trolls, who said she was ‘too skinny’.

Earlier this year, Davina asked her 2.77 million followers on Twitter for advice on a painful-looking injury.

Revealing that she’d torn the tendon in her finger, she wanted to know if she could get the plastic cast she’d need from a pharmacy or if she should just go to hospital.

Got to go to work but IVe just torn the tendon in my finger … do pharmacies sell the little plastic casts for this ? Or do I have to go to doctor/hospital #AskTwitter pic.twitter.com/aiPN4VE9eJ

She said she hurt her finger while putting on leggings!

What did you think of Davina’s dancing clip? Leave us a comment on our Facebook page @EntertainmentDailyFix and let us know.