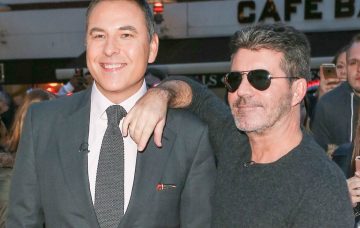 David Walliams and Simon Cowell share a very unique friendship and often poke fun at each other.

Comedian David has jokingly mocked his Britian’s Got Talent co-star for having too much cosmetic work.

Earlier this year, music mogul Simon confessed to having a non-surgical facelift and has admitted to having “too much” botox in the past.

He joked: “His face has always changed. Something has happened. You think, ‘What has gone on? What exactly? Did you have a terrible accident or something?’

Of course, it was all in jest!

Earlier this year, Simon opened up about undergoing a £2,000 treatment called The Silhouette Soft Lift.

The procedure involves sewing bioplastic-infused threat into the face and neck and tugging it to get rid of sagging skin.

In May, Simon told The Sun: “There’s lots of things you can do now. You don’t just have to stuff your face with filler and Botox.

“It hurts like hell but it gets rid of sun damage and unplugs all the crap.”

Meanwhile, back in May, David opened about his friendship with X Factor boss Simon.

During an appearance on Lorraine, he said: “We’re like brothers, we love each other and hate each other in equal measure.

“It’s a really weird relationship and very genuine,” he added.

He also admitted he once jokingly told Simon that his son Eric, four, would need “plastic surgery” to be as good looking as David’s son Alfred.

David recalled a moment when Simon, 58, had asked him whose son was better looking, Eric or David’s five-year-old little boy Alfred, who he shares with his ex Lara Stone.

He explained: “[Simon] said to me one day, ‘who do you think is more better looking, my son or your son?’ I said, ‘Well my son is obviously better looking but the good thing is you’re rich so you can pay for your son to have plastic surgery.’”

Host Lorraine Kelly asked: “You didn’t say that?!” to which David replied: “Yes I did!”

Of course, it was only a joke and David didn’t obviously mean it.

Do you enjoy watching Simon and David on BGT? Leave us a comment on our Facebook page @EntertainmentDailyFix and let us know what you think!