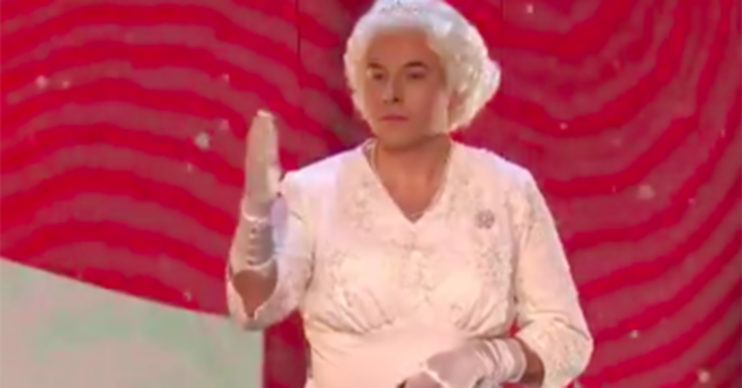 Britain’s Got Talent host David Walliams has viewers in absolute hysterics in the programme tonight (Saturday, May 30).

The BGT judge and children’s author, 48, impersonates the Queen for the latest episode of the ITV talent show.

The National Anthem, God Save The Queen, plays as David makes his dramatic entrance.

And low and behold, the funnyman enters the stage from above dressed as Her Majesty herself.

“This is getting out of hand”

Although the audience and Ant and Dec are in hysterics, Simon looks far from amused.

He even says: “This is getting out of hand.”

However, the viewers at home appear to love David’s impersonation efforts.

Over on Twitter, where the BGT account shared the clip, several viewers tweeted how funny they find the scenes.

But a third didn’t seem so impressed, commenting: “I have always said watching David Walliams was a drag. This proves it.”

David is of course well known for his affinity for cross-dressing. He plays several female characters on his hit series Little Britain.

He also wrote a children’s book that celebrates cross-dressing, The Boy in the Dress.

In a 2013 interview, he described how a leading drag role in a school play paved the way for his successful career.

But he also noted that he was teased for it.

OMG! We can't believe The Queen herself is appearing on… Oh wait it's just @davidwalliams 😆

Now THAT is what you call a real scene stealer! 🤣

Join our Judges for more #BGT shenanigans TONIGHT at 7pm on @ITV and @WeAreSTV 🌟 pic.twitter.com/0XRuBd94oh

He told The Mirror: “I wasn’t a happy child. I was teased for being girly in some ways. Playing characters was some form of escapism.

“At that time, the biggest insult was to be called gay.

“I wasn’t a happy child”

“But there I was, embracing my effeminacy, because I was the gayest thing that ever lived.””

In fact, David even plays alongside a fictionalised version of the Queen (Samantha Bond) for the 2018 Sky Comedy The Queen and I.

He plays a fictional Prime Minister, who forces the Royal Family to live on a council estate after the UK becomes a republic.

What do you think of David Walliams as the Queen? Share your thoughts with us on our Facebook page @EntertainmentDailyFix.