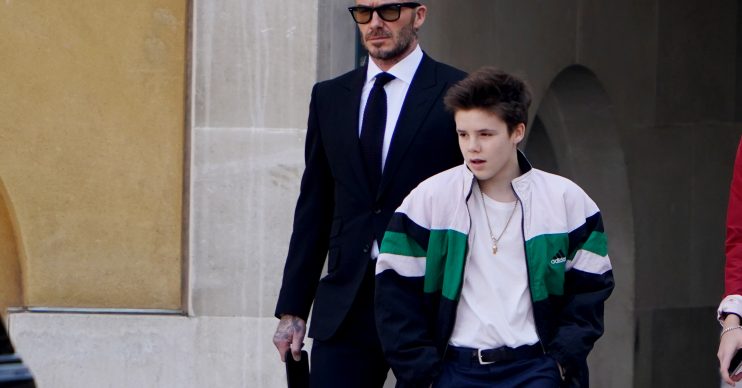 Such a close family!

Nobody, not even if you’re the son of some of the most famous people in the world, can escape being embarrassed by your parents on your birthday.

Cruz Beckham, the third son of David and Victoria, turned 15 on February 20 and his doting mum and dad posted a roll of images on their Instagram accounts celebrating his life so far.

Victoria wrote: “Can’t believe our baby is 15 today!! We all love u so so so much xxxxx so many kisses xxxxxx”

The first cute image is of Cruz playing judo (looking amazingly similar to his famous mum). Other pictures include a couple of Victoria cuddling him.

There is a previously never seen photo of Cruz as a baby sitting on the stairs with his brothers.

Another shows him looking cool in a bow tie with slicked back hair.

One image looks like Cruz has been playing around with his mum’s make-up, wearing lipstick dots on his face while a further snap pretending to lift weights in the gym with his dad David.

The most recent picture is from his sister Harper’s christening at Christmas 2019.

Born in Madrid in 2005, Cruz takes his name from the Spanish for ‘cross’. Traditionally Cruz is more popular as a girl’s name.

Not to be outdone, dad David posted a similar selection of never-before-seen family snaps.

He gushed: “Happy birthday to my crazy little man… Dad loves you so much and am so proud of the heart you have and the crazy character that you show me every single day 🤔 Happy Birthday Cruzie”

The Beckhams’ youngest boy has always been an outgoing lad, first appearing on stage with his older brothers Brooklyn and Romeo, during the Spice Girls’ world tour in 2008 appropriately nicknamed ‘Family Affair’.

He followed in his mum’s pop footsteps back in 2016, releasing a single, and his proud parents have commented before that he’s musically talented.

Like most teenagers these days, Cruz has his own Instagram account and recently posted some happy family moments as nearly all of the Beckham brood reunited for Victoria’s fashion show in Paris. He wrote: “Congratulations Mum so proud of you.”

Congratulations mum I’m so proud of you, such an amazing show ❤️❤️❤️❤️❤️ @victoriabeckham