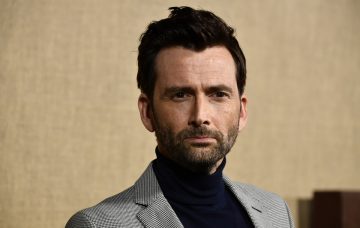 David Tennant has revealed his appearance on Doctor Who was inspired by TV chef Jamie Oliver.

The 47-year-old actor starred as the tenth Time Lord on the popular sci-fi series, and David has revealed that his now-iconic look of Converse sneakers and a suit was inspired by Jamie.

He explained to Insider magazine: “I had these really old, battered, cream-coloured Converse shoes that I brought in and I said, ‘I want to wear these.’ And people didn’t like that idea. I had to really fight for them.”

Despite the uncertainty of the production team, David was intent on wearing the sneakers – and he doesn’t have any regrets about the decision.

He added: “That was the only thing I absolutely insisted on, battered old shoes because that always just felt like that was the right thing to do. I’m glad I did.”

David then admitted that his unusual on-screen appearance was inspired by an unlikely source.

He said: “I remember seeing Jamie Oliver on a chat show. He wore a suit with his trainers, and I thought, there’s something about that kind of says the right thing. It’s kind of like, ‘I’m sort of an official, but I’m really not.'”

Read more: Bradley Walsh’s fans to face conflict as Doctor Who and The Chase clash

The actress explained she doesn’t want to take in too much in case it clouds her own performances.

She said during a press launch for the new series last month: “The joy of a role like this is in making it your own. It has elements that continue throughout the whole of time and space, but what’s brilliant is the lack of walls around it.

“You’re trusted that your instinct is right for the moment. That’s why it’s a role that so many people would love to play, and why so many people that have played it have adored it, and only speak passionately about it. But when I hand over these shoes, I’m going to watch it from episode one!”

Do you enjoy watching Doctor Who? Leave us a comment on our Facebook page @EntertainmentDailyFix and let us know what you think!