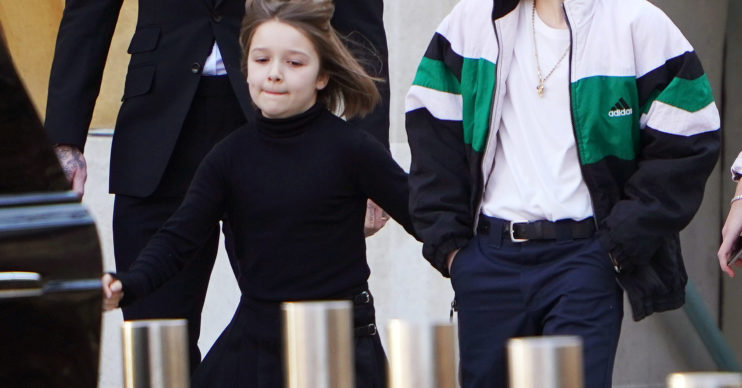 Footy legacy now lies with Harper, who plays every week

Victoria Beckham has revealed that all three of her sons – Brooklyn, now 20, Romeo, 16, and Cruz, 14 – were worried their dad would be disappointed when they decided not to become players.

“I remember Romeo sitting in the bath getting really upset saying, ‘I don’t want to let Daddy down’. So I told him daddy just wants you to be happy.

David previously admitted he was “heartbroken” that his sons don’t play football anymore – and is relying on his seven-year-old daughter Harper to keep his legacy alive.

He previously said: “Harper is playing every Sunday and loves it. The boys don’t play and it’s heartbreaking. They have a talent but it’s down to Harper now.

“I get very enthusiastic when watching her. The other day a boy took her down and I had to think how to react with all the other parents watching me.

“Do I act like a UNICEF Ambassador or do I act like Harper’s daddy? In the end, I let it go!”

David revealed in 2015 that the then-three year old loved kicking a ball about with her big brothers.

He told BANG Showbiz: “Harper’s skills are coming on pretty well. We’ll see if she wants to follow in my footsteps or not, she loves playing it with the boys.”