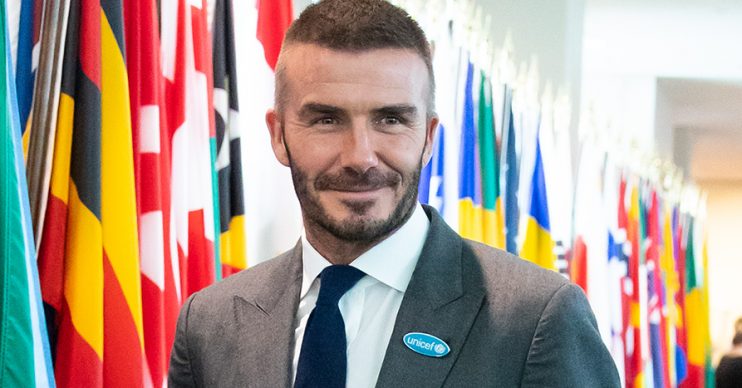 He stars alongside Courteney Cox in the US comedy

Fans of David Beckham have been sent into a spin after he teased a clip of his upcoming cameo in US comedy Modern Family.

David, 44, confirmed last year that he would be making an appearance in the hit show and he has now given fans a glimpse of his starring moment.

So much fun filming on one of my favourite shows #modernfamily with @courteneycoxofficial and @stephenmerchant. US fans of @abcmodernfam can see what we got up to on Jan 8th at EST 9PM.

In a short clip posted on his Instagram page, the footballing legend can be seen walking onto the set with Friends star Courteney Cox, 55.

The pair then tell Higgins – a one-off 2014 character reprised by Brit Stephen Merchant for this episode – that they have hired a bowling instructor to help prepare them for a celebrity bowl-a-thon.

David says: “Higgins? So myself and Courteney are expecting a bowling instructor. Would you have him meet us downstairs at the bowling alley please?”

When Higgins suggests they need help, Courteney teases: “You should’ve seen the way he bowled last year. A dollar for each of the 18 pins you knocked down.”

Rolling his eyes at Higgins, David then sighs “harsh” before he and Courteney walk away.

Writing alongside the sneak peek clip on Instagram, David told his 60 million followers: “So much fun filming on one of my favourite shows #modernfamily with @courteneycoxofficial and @stephenmerchant.”

David has been inundated with comments after sharing the post, with his fellow footballer pal Robbie Keane writing: “Love that show, buzzing for you pal.”

The dad-of-four’s fans appear to be particularly excited by David’s acting debut, with one gushing: “My fave footballer and my fav actress in one TV episode? Could this BE any more perfect?!”

Another said, “I so need to see this!” and one fan even asked, “When are you going to the Oscars?”

David’s episode of Modern Family will air in the US on January 8, though a date for UK fans to watch is yet to be confirmed.