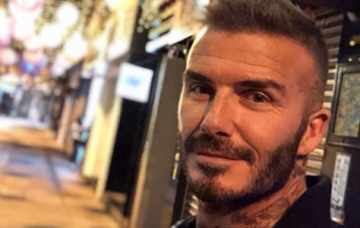 Peggy is not impressed by Uncle David!

As a father-of-four he’s had plenty of practise with babies, so you’d think David Beckham would be a dab hand at entertaining his niece.

But the former England footballer revealed on his Instagram Stories that little Peggy – his sister Joanne’s daughter – was not amused by his antics on a recent visit.

David shared a sweet snap of him kissing the little girl’s hand as she faced in him a high-chair – but she scowls in response.

“Peggy is not impressed with Uncle David,” he wrote on the image, tagging his younger sister in.

The next photo shows he has started to win Peggy over though, as she almost breaks into a smile.

“Maybe a little more now,” he writes, as he is seen holding Peggy’s hand.

David has previously shared images of him meeting the latest addition to the family and gushing over how cute she is.

Over the Bank Holiday weekend, his wife Victoria shared images on her Instagram of the family enjoying the sunny weather in the English countryside with her parents.

Unfortunately David couldn’t join them as he’d flown out to Miami, where he is launching a football team to play in the USA’s Major League Soccer.

Victoria, 44, wrote beside her family photo: “Pub lunch in the sunshine. We love and miss u @davidbeckham kisses”

She also shared images of herself enjoying a horse ride with Harper.

“Living my best country life!! The perfect day riding with Harper,” the fashion designer wrote beside a selfie in the saddle with her riding helmet on.

In another snap of her and Harper on horseback, she wrote: “Perfect end to the most perfect weekend. Riding with my baby in the sunshine.”

Meanwhile, Victoria has been tight-lipped about regrouping with the Spice Girls but Mel B announced on Loose Women that they are working on new projects.

“We are in the works of figuring the stuff out – I don’t want to say too much. All five of us have signed with Simon Fuller.

“I can’t say exactly what and when but it’s all very exciting,” she told the Loose Women on Tuesday, as she joined the show for a stint as a guest panellist.

Asked by host Ruth Langsford if the reunion would involve releasing new music, Scary Spice said: “It’s going to be a bit of everything. If it was up to me we’d go on tour immediately. Maybe we will soon – hopefully.”

Do you want to see Victoria Beckham performing with the Spice Girls again? Leave us a comment on our Facebook page @EntertainmentDailyFix and let us know what you think!