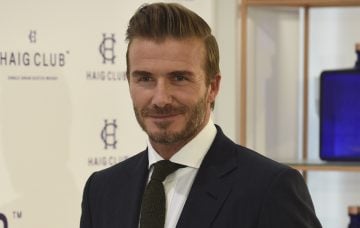 What a beautiful moment

David Beckham has shared a beautiful pic to mark the end of his holiday in Indonesia with his family.

The former footballer posted an idyllic snap to his Instagram story showing himself and daughter Harper, seven, cuddling and watching the sunset on Sunday night.

The image sees Harper snuggling into her dad as they gazed at the orange sky.

David captioned the photo: “Final sunset,” which could be a hint their holiday is coming to an end.

Earlier in the day, the star had posted a video and pic of Harper horse riding on the beach.

The picture sees the little girl wearing a helmet as she rides the horse, which was being guided by another person.

David, his wife Victoria and their four kids have been exploring Indonesia for the past week.

They have been to Bali, as well as an island called Sumba, where they visited a school to meet the local kids.

Fashion designer Victoria took to Instagram last week to share a string of posts showing her kids, Brooklyn, 19, Romeo, 15, Cruz, 13, and Harper playing and hanging out with the children.

As well as playing with the children, she said Cruz and Harper were helping them learn English.

The family were getting involved in the Sumba Foundation, which wants to alleviate poverty by providing access to drinking water, general health, education and economic opportunities.

And that was just one of the family’s many adventures in the country.

On Saturday, the family spent some quality time together by embarking on a river excursion.

In a string of clips, David filmed Brooklyn and Cruz climbing a coconut tree to go after the coconuts.

The pair picked coconuts and threw them down to the family waiting in the boats below.

David posted two shots of Brooklyn hanging from the underside of the tree trunk, saying “This cannot be good.”

He then added a third photo of Brooklyn falling from the tree and into the water.

Have you ever visited Indonesia? Leave us a comment on our Facebook page @EntertainmentDailyFix and let us know what you think!