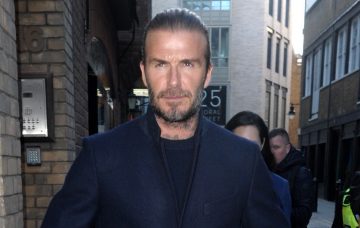 He says it's all down to Harper to follow in his footsteps!

David Beckham has said it is “heartbreaking” that his sons do not play football.

David said his only daughter, Harper, was playing the sport and “it’s down to Harper now” to carry on his footballing legacy!

Read more: Michelle Keegan signs for Who Do You Think You Are?

David, 43, also told BBC One’s The Graham Norton Show about a recent incident while watching six-year-old Harper on the pitch.

He said: “Harper is playing every Sunday and loves it. The boys don’t play and it’s heartbreaking. They have a talent, but it’s down to Harper now.

“I get very enthusiastic when watching her.”

David added: “The other day a boy took her down and I had to think how to react with all the other parents watching me. Do I act like a UNICEF ambassador or do I act like Harper’s daddy? In the end, I let it go!”

The fourth child and only daughter of the Beckhams, Harper’s middle name is Seven, the number worn by David when he played for Manchester United.

Brooklyn, the eldest son of David and Spice Girl Victoria, is a keen photographer and currently studying photography at college in New York.

Brooklyn released his own photography book, What I See, last year.

Meanwhile, Romeo appears to be an avid tennis player, while Victoria has posted videos on social media of the couple’s youngest son, Cruz, showing off his singing talents.

This isn’t the first time David has spoken of his sons’ decision not to follow in his footsteps.

David previously told Radio Times: “The other day Romeo turned around to me and said he didn’t want to play football anymore.

Without naming names, he also told ABC News in 2015: “One of my boys turned around to me the other day and said, ‘Daddy, you know, I’m not sure I want to play football all the time…’ It broke my heart a little bit.”

David continued: “[He said], ‘Every time that I step onto the field, I know people are saying, ‘This is David Beckham’s son’, and if I’m not as good as you, then it’s not good enough’.

“I said, ‘Okay, stop right there… You play because you want to play’.”

In a video clip, Ryan, dressed as the character, offered up a “sorry” following a gag made in the first film mocking David’s speaking voice.

Ryan is also a guest on Graham Norton’s show this week, alongside his co-star Josh Brolin to promote Deadpool 2, which will be released in the UK next week.

The Crown’s Vanessa Kirby is also a guest and Joan Armatrading performs on the show.

Meeting with an old friend…@vancityreynolds #Deadpool2

The Graham Norton Show airs on BBC One at 10.35pm on Friday.