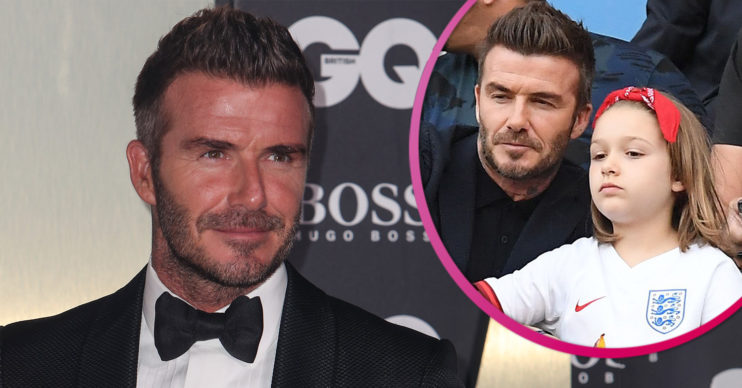 The footie legend, 45, took to Instagram to show that the family bed had had an intruder.

We had a visitor in the night ♥️ #HarperSeven ♥️ @victoriabeckham

What did David Beckham say about Harper?

The super-cosy image showed David and wife Victoria, 46, all tucked up in bed on a Sunday morning.

In between the two parents was nine-year-old Harper, seen flashing a cheeky smile.

Read more: David Beckham looks blurry-eyed as he celebrates ‘historic win’ at 3am

The adorable snap was captioned by Becks, who said: “We had a visitor in the night #HarperSeven.”

It didn’t take long for many of his 64million followers to share their delight in the photo.

What did David Beckham’s followers say?

Finally, one follower cooed: “So Beautiful.”

What else have the Beckhams been up to?

It’s been a big month or so for the Beckham family.

And dad David finally had to admit defeat and confirm that his now-adult son was taller than him.

Posting a series of images to his Instagram Stories, David and Romeo were seen standing face-to-face as they took part in a family measuring competition.

He captioned the image: “Me just trying to prove I’m still taller.”

He also paid tribute to Romeo in a separate post.

“You have grown into the most beautiful person and that as you say yourself (a man finally) we love you so much never give up on your dreams & goals,  this shows from day one in my arms with the song you were born to up until our latest moment where yes I had to finally admit my son is taller than me.”