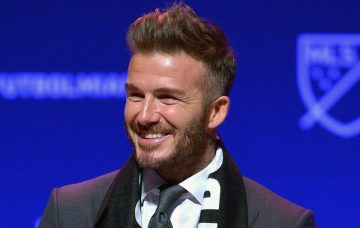 Something BIG has been happening in David Beckham’s life over the past couple of days – and we’re not just talking about that haircut!

And in an emotional press conference, he expressed his heartfelt gratitude to the people who most inspired him to fulfil his dream – his family.

Looking resplendent in a posh suit with a Miami scarf draped over his shoulders, Becks told the assembled media: “I want to thank my family. My son Brooklyn [who was in the audience].

“My wife Victoria, who’s at home with the other kids.

“They’ve been there through the good times and the bad times, and I owe them everything.”

Well, if Becks is proud of his family, the feeling is clearly mutual as the Beckham clan later made an appearance in a video put together to congratulate the footy legend.

Read more: David Beckham has chopped his locks short – and his fans love it!

Then they each took turns to say a few words to their father on his big day.

Brooklyn started it off: “Dad, I can’t believe you’re going to be a club owner. That’s so cool and we’re all so proud of you.”

Next up, Romeo said: “I’m so proud of you. I can’t wait to see what players you sign.”

Read more: Brooklyn Beckham’s ex insists she’s “so over” him after three years of heartache

His little brother Cruz then added: “I’m so excited that we get to spend more time in Miami and keep eating cabanas [a kind of street food].”

Afterwards, Victoria had a message for her husband: “We can’t wait to be sending much more time in Miami as a family.”

And just to show how famous Beckham is, there were even comments on the video from the likes of Usain Bolt, Serena Williams and Will Smith!

Fittingly, it was Goldenballs himself who had the final word.

After uploading the video to his Instagram, he captioned it: “Thank you so much to my family, friends, partners and all of my fans for the incredible messages of support today!”

Good luck with everything, Becks!

Thank you so much to my family, friends, partners and all of my fans for the incredible messages of support today! @futbolmiamimls #FutbolMiamiMLS