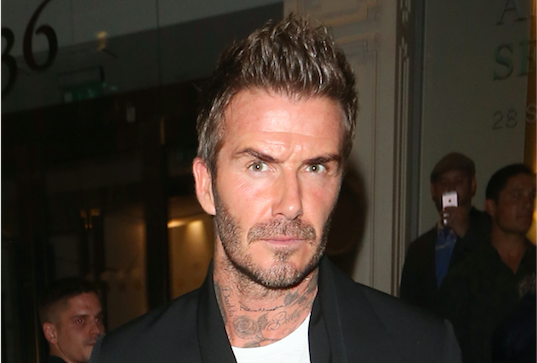 Eagle-eyed viewers spotted a private chef lurking in the background

David Beckham has been mocked on social media after he posted a video of himself on Instagram carving up his family’s Christmas Day turkey.

The former footballer turned Miami CF president, 44, shared a video on Instagram to his some 59,9 million followers.

And in the now deleted clip, a private chef could be seen hovering in the background.

Several eagle-eyed viewers took to Twitter to mock the likely oversight on the football mogul’s behalf.

One tweeted, “The hilarious thing about David Beckham carving the turkey for the fam is the chef in the background looking at him likeeee…….’you’re carving it wrong mate!!’ oh and he has now deleted the vid because it prob looks snobby and he was doing it badly! #DavidBeckham.”

And another posted: “Private chef ? Or you think becks cooked it himself?”

Private chef ? Or you think Becks cooked it himself?

On one story David shared a picture of daughter Harper, eight, kissing the young pup.

He caption the photo with: “Little Sage being welcomed to the family this Christmas morning.”

David’s wife of 20 years, shared a slew of adorable family photos, including one of David donning a Santa hat with his sons, Brooklyn, 20, Romeo, 17, and Cruz, 14.

She also introduced the puppy on her own stories with a picture of Brooklyn cradling the new family member.

The news comes a week after Victoria shared pics from the baptism of her youngest children, Cruz and Harper.

Eva Longoria, 44, and Marc Antony, 51, were made godparents as the kids were baptised in a traditional church ceremony.

Do you think David cooked the turkey? Tell us what you think on our Facebook page @EntertainmentDailyFix.