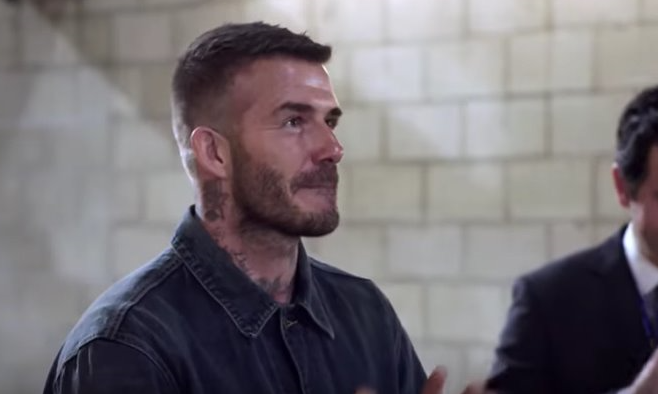 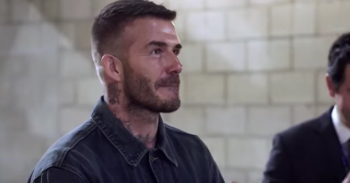 David Beckham is the victim of hilarious prank by James Corden

David Beckham has become the butt of a mean joke played on him by his pal James Corden.

The Late Late Show host decided to create an elaborate hoax as a skit for his US show and he made David, 43, his main target.

He roped in a team of actors to present an unwitting David with a FAKE version of the statue – and it certainly wasn’t a flattering replica!

In a clip from The Late Late Show, James, 40, explains: “David’s a good friend of mine and when I heard he hasn’t seen the fully finished statue yet, I thought it might be fun to switch out the real statue with one we made a little less flattering.”

David is then seen arriving for the pretend unveiling of his bronze and looks happy as he chats with who he thinks are the artists and organisers of the event.

Meanwhile, James waits in the wings and watches the drama unfold on camera.

As the curtain drops to reveal the ugly statue – complete with wonky eyes, an over-sized chin and a huge bum – David’s face drops!

When the actor playing the artist asks him what he thinks, a stunned David replies: “It’s slightly different than when I saw it in Chicago, though.”

He then appears to get more flabbergasted as he is the only one bothered by the grotesque statue!

“I mean, look at my chin,” he adds, insisting: “It doesn’t look anything like me – look at my eyes. The only thing that’s good is the hair.”

He exclaims: “Look at my bum. It’s definitely not that big,” – causing James to roar with laughter backstage.

An increasingly frustrated Becks then adds that he doesn’t want to “offend” anyone but he thinks the figure is “embarrassing”.

At one point it looks like the star is going to storm out.

But adding to the drama, a forklift then tries to move the statue and smashes it to pieces!

Poor David is then put out of his misery as James runs around the corner and the penny suddenly drops.

After a rather sweary rant at his friend, Becks laughs it off with James, telling him: “Thank God for that.”