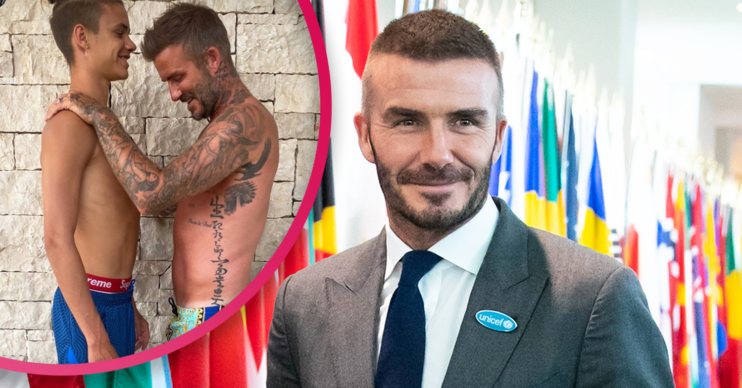 David Beckham has finally admitted that his son Romeo is taller than him.

Romeo turned 18 today (September 2) and both his famous parents posted tributes to celebrate his day.

However, it was his dad’s that got the most laughs.

Posting a series of images to his Instagram Stories, David and Romeo could be seen standing face-to-face as they took part in a family measuring competition.

Both men appeared shirtless, with David wearing a pair of rather snazzy-looking Versace shorts.

He captioned the picture: “Me just trying to prove I’m still taller.”

David accompanied the picture with the shhh emoji.

Yes, I had to finally admit my son is taller than me.

The next picture showed Romeo had indeed grown taller than his famous dad.

He posted: “Happy 18th to my little man (or not so little any more).

“You have grown into the most beautiful person and that as you say yourself (a man finally).

“We love you so much, never give up on your dreams and goals,” he said.

David then revealed that his video post featured pictures “from day one” when he felt held his son in his arms.

“My son is taller than me”

He continued that the pictures went right up until “our latest moment where, yes, I had to finally admit my son is taller than me”.

How did Romeo celebrate his birthday?

Romeo celebrated his birthday with his extended family, with mum Victoria sharing precious photos to her social media.

They showed Romeo cutting into a pretty delicious-looking birthday cake and posing for pictures with his grandparents.

Girlfriend Mia was no doubt also on hand to wish her other half a very happy birthday.