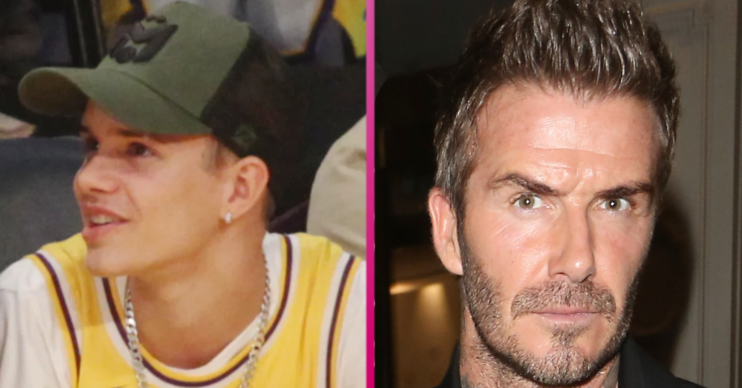 The famous family are currently living it up in Italy

David Beckham and his son Romeo left fans in hysterics after the teenager poked fun at his dad during a golfing day out.

The two were enjoying a game of golf when Romeo took the opportunity to prank his famous father.

Taking to Instagram, the model shared a clip of David in a buggy – but failed to let him know his bag wasn’t strapped on!

Romeo, 17, filmed himself walking towards the buggy as David joked: “Come on little man. Actually, will you walk to your ball?”

As the dad-of-four began to set off, the golfing bag fell off and landed on the ground below.

David, 45, abruptly stopped the cart and looked back as Romeo laughed to himself.

He captioned the post: “Who you calling lil man @davidbeckham? 😂 .”

Read more: Stacey Solomon reveals how she gets her bed linen pristine with new home hack

Fans rushed to comment on the clip, with many called it “revenge” for Romeo after his dad pulled a similar prank on him just hours earlier.

Another said: “Revenge is Sweet.”

Thankfully David also clearly saw the funny side as he commented a string of laughing face emojis.

The former Manchester United ace also documented their day out together on his Instagram Story.

He treated his 63.7 million followers to several golfing snaps, including one of him carefully concentrating on a ball.

And while the boys spent the day at the golf course, mum Victoria was spotted taking a well-deserved break in the sun.

The fashion designer stunned fans by sharing a bikini photo during her family holiday today (July 22).

Victoria and David are believed to be on holiday in Italy with their four kids, Brooklyn, Romeo, Cruz and Harper.

Alongside the image of himself and the actress, he wrote: “Two weeks ago I asked my soulmate to marry me and she said yes.

Brooklyn’s proud parents were quick to celebrate the announcement, with Victoria writing on Instagram: “The MOST exciting news!!

Read more: Gemma Collins continues to show off weight loss in swimsuit as she relaxes in pool

And David added: “Congratulations to these two beautiful people as they begin this exciting journey together.

“We are so so happy for you guys.”

However, over the weekend, his Brooklyn’s ex Lexy Panterra is reported to have claimed the star is “too immature” to get married.