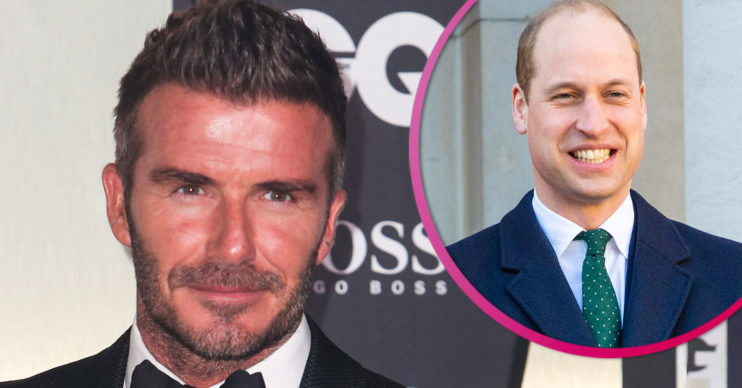 They spoke about mental health for William's campaign Heads Up

David Beckham has teamed up with Prince William for an important video call on mental health.

The Duke of Cambridge spoke to former England football captain David, Manchester City and Women’s captain Steph Houghton and Aston Villa’s Tyrone Mings as part of his Heads Up campaign.

The Heads Up campaign uses football to normalise the conversation around mental health.

What did David Beckham and Prince William say in the video call?

Former footballer David said: “I’m the one who is preaching to my kids and also other kids that I talk to out there that it’s really important to talk.

“It’s really important to say if you’re not okay, because like you’ve said that this time more than any time, there’ll be a lot of sportsmen, a lot of footballers that have had four or five months off that are coming back into the game that have been anxious over this time…

Thank you to David Beckham, Steph Houghton, Tyrone Mings, Andros Townsend, and Carlo Ancelotti for joining in on the #HeadsUp discussion ⚽ • Click our link in bio to see what they had to say about the importance of prioritising mental health in football. The conversation came shortly after the announcement that football has come together to sign a joint Declaration committing to make mental health a key priority at all levels of the game, as a lasting legacy of #HeadsUp.

The father-of-four also spoke about the moment he got sent off during a World Cup match in 1998 – when he was 23.

David said: “When I look back on it now, I didn’t realise how hard it was but I just remember the times where I faced adversity throughout my career, ‘98 was by far the toughest.

“Once you’re on the field, you have to mentally prepare for that.

“You have to really understand that yes, you have your teammates.

“But that doesn’t make you stop thinking ‘what are they saying about me in the crowds?”

What else did David say?

He added: “I think I went through that at a very young age.

“I was constantly criticised on the pitch verbally. But like I said at the start of this, times have changed.

“If social media was around when I was going through that time in ‘98, it would have been a whole different story.”

Read more: Princess Diana ‘would be devastated over William and Harry’s fallout’

“What an honor and privilege to change the world with such amazing people.”

Another commented: “This is so refreshing and will literally save lives. Well done!”