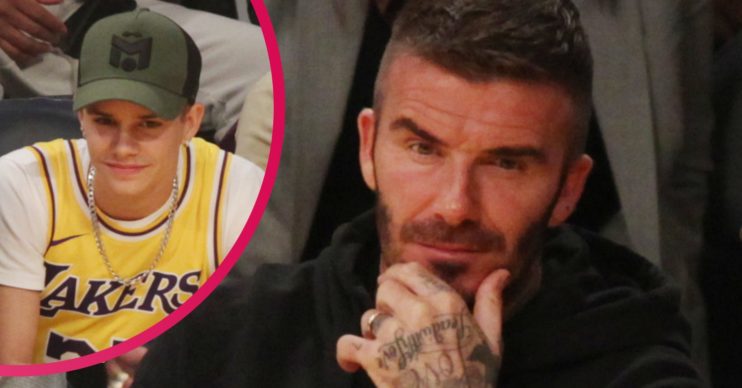 David and Victoria Beckham’s son Romeo poked fun at his dad after he shared a sizzling shirtless picture on social media.

On Instagram, the former footballer, 45, posted a snap of himself working out that showed off his ripped abs.

David captioned the photo, “I really hate tricep dips as a finisher” alongside an angry face emoji.

What did David and Victoria Beckham’s son say about his dad?

In the comments, David’s son Romeo, 18, couldn’t help taking a hilarious dig at his dad.

The teenager wrote, with a laughing-crying emoji: “OK big man.”

Read more: Victoria and David Beckham at ‘war with neighbours over fears they will use speedboats on their Cotswolds lake’

The comment quickly racked up dozens of ‘likes’ and David appeared to find it funny.

He replied to his son with a string of laughing emojis.

David’s fans, meanwhile, gushed over the picture, telling him in the comments how hot he looks.

I really hate tricep dips as a finisher.

One joked: “No dad bod with Becks.”

It comes after David’s wife, Victoria, appeared on Lorraine.

The former Spice Girl was on the ITV daytime show earlier today (Wednesday, December 9), however some viewers criticised her over her body language.

Some of those watching felt that the star’s interview on presenter Lorraine Kelly’s show came across as far too ‘rehearsed’.

The 46-year-old fashion designer chatted with Mark Heyes from her London office and opened up about her eldest son, Brooklyn, and his upcoming wedding.

Read more: Victoria Beckham shocks fans with posh tracksuit as they compare it to ‘Primark’

She said of her son and his fiancée Nicola Peltz: “They’re so happy. She’s wonderful, sweet and kind. She’s such a lovely, warm woman. We couldn’t have asked for Brooklyn to meet a more adorable lady.