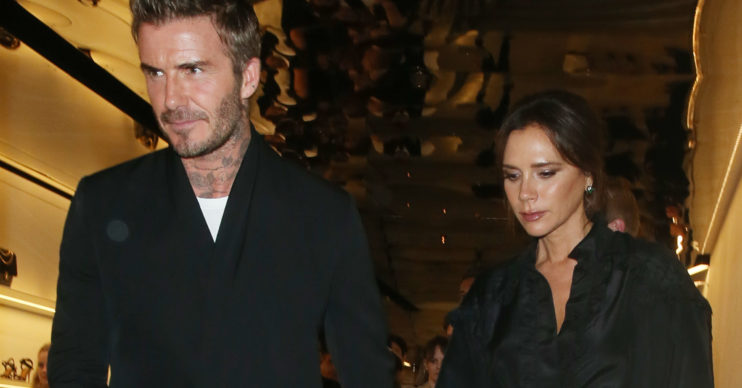 The famous family are currently in lockdown at the estate

David and Victoria Beckham are reportedly stepping up security at their Cotswolds estate by adding a gatehouse and 24-hour surveillance.

The celebrity pair – who are currently isolating in the countryside retreat – have submitted the plans to West Oxfordshire District Council “to improve security for occupants of the property.”

According to the Daily Star, the proposed gatehouse will be guarded by two security guards, even when the family are not at home.

The application, which is yet to approved, also lists plans for a getaway tunnel.

The underground passage will provide a link for the family between the main building and a wine cellar under the garage.

Planning agents for the house told the publication: “The proposed development includes a new basement cellar constructed beneath the extension to the existing garage outbuilding with a linked walkway. The basement cellar beneath is for storage of wine.”

Last year, David, 45, and Victoria, 46, were said to have installed a razor wire fence around the luxury home to prevent break-ins.

The couple took the precaution of adding extra security after two break-in attempts in two months.

A source told The Sun newspaper at the time: “I was surprised to find out it didn’t need planning permission. It makes the place look like Colditz.”

The first attempted break-in occurred in October 2018 while the family were away in Australia and, weeks later, security guards chased a man away from the property.

Read more: Gordon Ramsay fans claim he is the ‘double’ of son Oscar in new post

The couple are isolating at the estate with three of their children – Romeo, 17, Cruz, 15, and Harper, eight.

Meanwhile, eldest son Brooklyn, 21, is currently stranded in the US with girlfriend Nicola Petz.

The family also own a £31 million home in London.