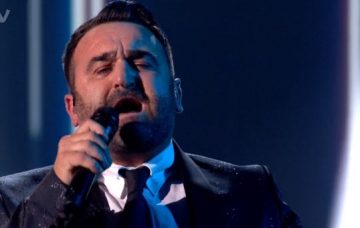 He was widely praised by the judges for how he coped

Singer Danny Tetley has been forced to restart his performance following a technical blunder during the first of this year’s X Factor live shows.

Danny, 37, paused his performance of Mariah Carey’s Hero after another contestant’s name was announced as he appeared on stage.

After Liverpudlian vocalist Anthony Russell’s name was read out, the singer began to sing before he turned to the judges and asked: “Sorry, can I start again? That’s thrown me off.”

He then began the song again, as mentor Ayda Field and her husband, Robbie Williams, gave him a standing ovation.

Danny, who auditioned on Pop Idol 17 years ago, performs to audiences in the Spanish resort town of Benidorm.

He received praise for his second take of the track, with head judge Simon Cowell telling him the distraction had actually improved the quality of his performance.

Simon said: “Don’t feel bad about what happened because it made you better in my opinion. These things happen, so who cares?”

Former One Direction star Louis Tomlinson added: “The pressure of what just happened to you and that you picked yourself up and delivered that vocal is absolutely incredible and you should be really proud of yourself.”

Robbie suggested that the singer was like “Mariah Carey with a beard” and said it was great to see him “overcome what just happened.”

Danny’s mentor Ayda added: “Danny, that song is all about the fight and you came out fighting from the top.”

Across the other 16 acts, Robbie proclaimed boy band United Vibe’s performance to be “leaps and bounds beyond One Direction”.

The 15-strong LMA Choir was also celebrated by the judges as they became the first choir to progress to the live stage of the competition.

Teenage hip hop duo Acacia and Aaliyah delivered an energetic performance that split the judges, with Simon suggesting it was “too American”.

Sixteen artists and groups made it through the testing six chair challenge before travelling to the judges’ houses.

There Robbie, Ayda, Louis and Simon each selected four artists or groups to make it through to the live performance stage.

Each Sunday for the next seven weeks at least one act will exit the competition.

The X Factor results show will air on ITV at 8pm tomorrow.

Did you enjoy the first X Factor live show of the series? Leave us a comment on our Facebook page @EntertainmentDailyFix and let us know what you think!