Emmerdale’s Danny Miller has hit out at Twitter for not doing more to crack down on online trolls.

The actor, who plays Aaron Dingle in the soap, criticised the site for giving him an unhelpful response about a user, who has been sending him abuse.

Venting his frustration to his followers, Danny shared a screen grab of the message he received from Twitter helpdesk after he reported the troll. 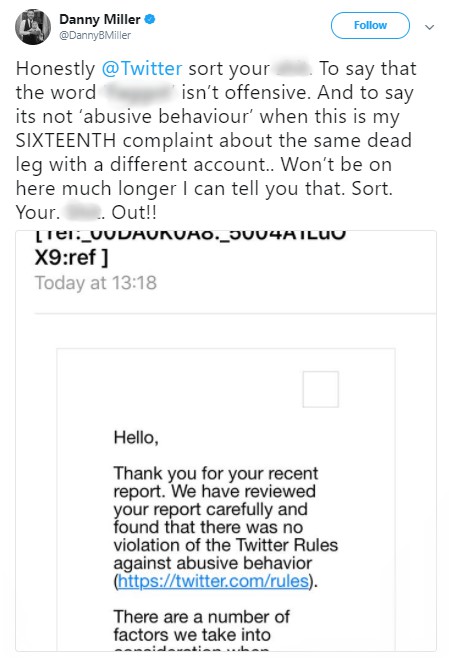 “To say that the word ‘[expletive]’ isn’t offensive,” he continued. “And to say its not ‘abusive behaviour.'”

Danny revealed this was his 16th complaint about the “same dead leg” –  a user who was using multiple accounts to send abuse to him.

“Won’t be on here much longer I can tell you that. Sort. Your. [expletive]. Out,” he added.

Twitter’s response to Danny’s complaints read: “We have reviewed your report carefully and found that there was no violation of the Twitter Rules against abusive behaviour.”

Fans rushed to offer their support to Danny over the situation.

One person tweeted: “This is just awful and why Twitter won’t do anything about this is beyond me.”

“Well done and thank you for standing against homophobia,” another fan said.

The heartwarming scenes showed the love birds confessing their true feelings for each other, after spending much of the past 12 months estranged.

And it seems the drama between the pair could finally be over, according to Danny.

He told Metro.co.uk: “I think this is it for them. I think all the high drama stuff is done. And I think a different side of them is shown, this is the happier side of life.”

Do you think Twitter’s response was good enough? Leave us a comment on our Facebook page @EntertainmentDailyFix and let us know what you think!