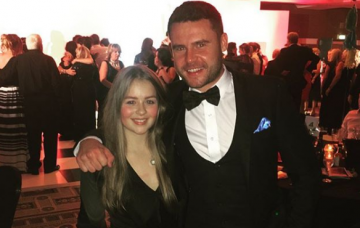 Danny Miller and Isobel Steele may only play brother and sister on Emmerdale, but it’s clear they still share a close bond off-screen.

Danny, who plays Aaron Dingle on the soap, took to Instagram story on Sunday to share a string of clips of Isobel showing off her hidden talent.

Not only can she act amazingly well, she also has a beautiful singing voice!

The videos show Isobel, 17, playing the keyboard while singing into a microphone.

Danny captioned the clip: “This family!!! My god!!! Jokes!!” followed by heart-eyed emojis.

In one clip, Isobel switches things up and plays the drums leaving Danny stunned.

Danny wrote: “Annoying how talented this girl is @isobelsteele.”

This isn’t the first time Isobel has showcased her singing talents.

Earlier this year, the star posted a clip to YouTube of herself singing her original song called Half Of It.

Fans couldn’t get enough of the clip and complimented Isobel on her “amazing” vocals.

One fan commented: “I’m so blown away by your talent!! this is incredible, iz! I could buy it on record right now and listen to it for hours with tears in my eyes! so beautiful.”

My Original Song ” Half of it ” Is now on Youtube!
Give it a listen and let me know what you think 🙂https://t.co/oPyjEEK843

Another gushed: “You are an incredibly talented human in so many ways!”

Isobel later admitted she was nervous about posting her singing online.

She told Digital Spy: “It was so scary putting it up! I just thought, ‘I’m going to do it and see what happens’.

“I got a great response and more views and messages than I thought I would get. People seemed to really like that.”

She added: “People were kind of mixing Liv and Isobel up by asking me if Liv would be singing things and whether Liv would sing at the Aaron/Robert wedding.

“But I don’t think that would happen.

“I know that’s what everyone wants, but I do feel they’re quite separate in that sense. My singing is a personal thing.”

Do you have a hidden talent? Leave us a comment on our Facebook page @EntertainmentDailyFix and let us know what you think!