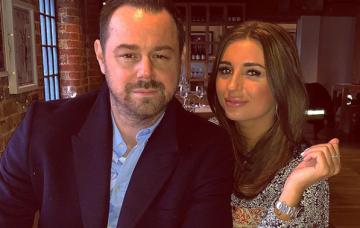 Stay on your best behaviour, Jack!

Danny Dyer has amused his Instagram followers by revealing what he would do if his daughter Dani got intimate with new boyfriend Jack Fincham during her time on Love Island.

Sharing a clip of Bruce Lee, the EastEnders actor adds his own voiceover saying: “Bruce very quickly, could you let everyone know what I would do to Jack’s flat if he joined the “Do Bits Society?” To the point and all, please.”

The “Do Bits Society” is a group the Islanders have formed for the couples who have done more than just kiss and cuddle in bed.

In Danny’s clip, the martial arts expert is seen smashing up furniture and fittings in the room using karate chops and kung-fu kicks.

The 40-year-old father-of-three commentates over the action saying in his Cockney accent: “Bookcase first I fancy, chair next – lovely; door, then window and then old desk – beautiful.”

He captioned the video #thedobitssociety.#loveisland.

Many people just added laughing face emojis and tagged in their friends so they could watch it.

“Omg this is amazing,” wrote one.

“This is the best Love Island reaction from anyone ever,” said another.

“I think this is one of the best things I’ve seen this year,” said a third.

It seems Danny doesn’t have anything to worry about at the moment though, as his daughter has made it very clear to Jack, 26, that there will be no funny business while in the villa.

She told him on Sunday night’s show that there would be no chance of them joining the “Do Bits Society” after Eyal and Megan became the first couple to have sex in the Hideaway.

“Not if you want to be able to look my dad in the eye,” she warned him.

Dani has previously said she promised her parents she would be on her best behaviour in the villa when it comes to bedroom antics.

Jack has reassured her he’s happy to be patient as he “respects her”. However, he has admitted to his male friends in the villa that he often feels sexually frustrated.

Jack and Dani have become favourites to win the show after their heart-warming moment over the weekend when he asked the 21-year-old to officially be his girlfriend.

He told her he likes her so much, he’s even been thinking about meeting her parents.

Thankfully Dani reassured him he had nothing to worry about: “I definitely think they’ll like you, there’s no reason to not like you, is there?”

Meanwhile, Danny tweeted over the weekend to say how much he is missing his daughter while she’s in Majorca filming the show.

He’s also joked about parachuting into the villa to meet Jack. We’d love to see that!

Will Danny get on with Jack when they meet? Leave us a comment on our Facebook page @EntertainmentDailyFix and let us know what you think!