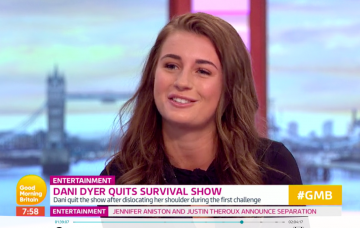 Survival Of The Fittest star Dani Dyer appeared on Friday’s Good Morning Britain to reveal the truth about rumours she’ll be appearing on the next series of Love Island.

Speaking to presenters Richard Madeley, Ranvir Singh, Charlotte Hawkins and Richard Arnold, the barmaid – who is actor Danny Dyer’s daughter – said: “I literally heard about [the rumour] the next day.

“I haven’t planned on going on Love Island, I think it’s a bit too intense for me.”

Richard – who is covering for Piers Morgan – asked if she would actually turn down an offer and Dani replied: “It’s one of those things really, I don’t think I would be open to doing something like that.”

Presenter Ranvir pointed out that her EastEnders star dad wouldn’t like her appearing on such a sexy show.

Dani replied: “No, he wouldn’t. I don’t think he could watch it. You know what I mean? Boys talking about me and stuff.

“So I haven’t made any plans. It’s not a bad rumour though.”

The Daily Star had previously claimed Dani was promised a spot on the popular ITV2 series, following her early exit from new reality show Survival Of The Fittest.

She was forced to leave after just one episode, when Dani dislocated her shoulder during a challenge which involved descending a slide at the start of an obstacle course.

A source said: “Producers saw in the brief time they got to know Dani that she is surefire TV gold like her dad.

“She is funny, sharp and sexy, in many ways she is the perfect Love Islander.”

The 22-year-old also opened up on GMB about her close friendship with her dad, saying: “He’s like my best mate, it’s so nice.”

Showbiz editor Richard asked if the actor was worried about seeing her flirt with the “fittest” men on the show.

Dani said: “He was, he was a bit nervous about that. He was. With Love Island it’s more intense romance. On this show, you could’ve chosen it. But now it is getting a bit more romantic.”

She added that suitors “get a bit worried” about approaching her because of her dad.

Dani also discussed her disappointment over leaving the reality show so soon.

The star was one of the best known signings for the show, billed as a new take on Love Island and hosted by Laura Whitmore.

An ITV spokesman said: “Dani injured her shoulder during the recording of a challenge. She was attended to by on-site medics and taken to hospital as a precautionary measure.

“As Survival Of The Fittest involves physical challenges which she wouldn’t be able to take part in, Dani isn’t in a position to be able to return to The Lodge and will therefore leave the show.”

Dani said afterwards: “For medical reasons, I can’t take part in any of the challenges because I am no use in a sling.

“I will just be sitting around and not be able to compete and I’m not meant to move (my arm) for a week so it wouldn’t be fair and there is just no point.

“I’ll just be an extra spare part if I carry on like this.”

The show, from the team behind Love Island, features “a group of young, hot singles living together” in sunny South Africa.

The 12 singletons “take part in the ultimate battle of the sexes”, including physical and mental challenges, to compete for a cash prize.

Love Island, hosted by Caroline Flack, was a huge, surprise hit for ITV2 last summer – and returns later this year.

Survival of the Fittest is on every night at 9pm on ITV2.

Will you still be watching Survival of the Fittest without Dani? Leave us a comment on our Facebook page @EntertainmentDailyFix and let us know what you think!