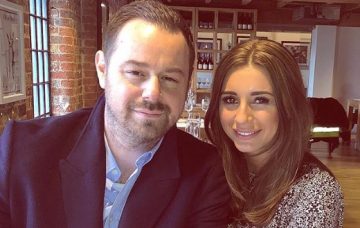 We wonder what her dad makes of this?

It’s a battle of the sexes series – dubbed the ‘Winter Love Island’ – where men and women will be pitted against each other in mental and physical challenges.

According to The Sun, Dani, 21, will be sent to the South African Savannah with other singletons, for the ITV2 show.

Dani is daughter to Danny, 40, and wife, Joanne Mas, and has two siblings, a sister, Sunnie and brother, Arty.

She’s been following in her dad’s footsteps, working as an actress for the past few years, and has a string of acting credits to her name. Her movie roles include parts in Age of Kill, starring Martin Kemp, We Still Kill the Old Way, starring Ian Ogilvy, and a few films dad also appeared in, including Vendetta and Doghouse.

Dani’s latest movie role is in a film called Heckle, a comedy-horror where a stand-up comedian is stalked by a mad heckler.

Actor Danny is best known for playing Mick Carter, the popular character in the BBC soap. The Cockney has also starred in The Football Factory and fronted documentaries such as Danny Dyer’s Deadliest Men.

The dad and daughter are clearly close, often posting pictures of each other on social media.

On Saturday, they both added a picture of them sharing lunch, with Dani captioning it simply, “Lunching”, with a love heart emoji.

Danny has spoken about struggling to bring up daughters, admitting last year during filming of Channel 4 show, Parenting for Idiots: “I couldn’t wait to have a boy because much as I love my girls with all my heart, I’m sick of trying to put a bikini on a Barbie. Honestly, it’s graft mate.”

He also admitted not being a fan of homework or trying to chat with other parents at the school gates, saying: “I can’t be doing with the small talk standing outside the school. I just want to see my baby come out of school.”

We wonder how he feels about his namesake’s potential new reality career?

ED! has contacted ITV and Dani’s representative for comment.