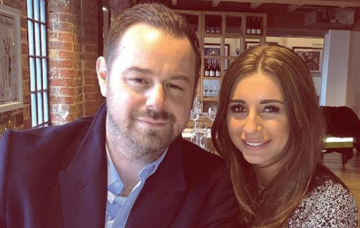 Danny Dyer stars in his own Love Island episode!

His daughter Dani is on the ITV2 original

Danny Dyer is showing support for his Love Island star daughter Dani in the most unlikely way possible – by getting involved in a penguin series based on the reality dating show.

The EastEnders star, whose 22-year-old daughter is among the hopeful singletons in ITV2’s Love Island this year, has joined forces with Chessington World of Adventures Resort for the hilarious spoof.

The theme park and zoo debuted the first episode of Penguin Love Island, a four-part mini-series, on Tuesday. But the one everyone’s got in a flap about is last night’s episode which was narrated by the Mick Carter actor.

“So when me and the kids was feeding them at Chessington I couldn’t help but get involved in all the capers. Beautiful!”

Danny documented the relationships of Chessington’s resident Humboldt penguins, who have thrown caution to the wind and decided that mating for life is not for them.

Penguin Love Island is available to watch on the Chessington World of Adventures social media accounts; here’s a taster!

Looks like a few feathers are going to be ruffled tonight when a new boy enters the Villa…#OiBirds #LoveIsland #PenguinLoveIsland @LoveIsland pic.twitter.com/hyk5alBjjR

Meanwhile, fans of Love Island have been sharing memes based on Danny’s potential reaction to his daughter’s exploits in the programme’s idyllic villa.

Dani is currently coupled up with pen salesman Jack, who has revealed he cheated on his last two girlfriends.

Many of the memes include what Dyer would think of Jack, while others have called for a special Gogglebox episode of him watching the raunchy show.

Do you have a favourite human Love Island-er yet? Leave us a comment on our Facebook page @EntertainmentDailyFix and let us know what you think!