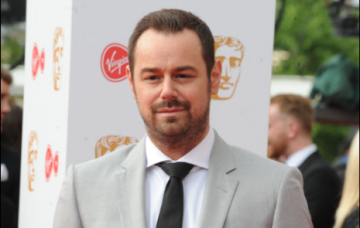 Danny Dyer has taken to Instagram to wish his youngest daughter a happy birthday.

The EastEnders actor shared a sweet picture of him and Sunnie in front of a lake with his 552k followers.

Wearing a flat cap, T-shirt and jogging bottoms, the 40-year-old has his arm around his little girl, who wears denim shorts and a pink hoodie with her brown hair in a high ponytail.

Happy 11th Birthday to my favourite girl in the world. Sunnie I love you. ❤️❤️

“Happy 11th Birthday to my favourite girl in the world. Sunnie I love you,” Danny wrote beside the snap.

Danny’s fans loved the image and hundreds commented to wish his daughter a happy birthday.

“Omg @officialdannydyer you two are so adorable,” wrote one of the snap.

“Ahh this photo, hope she has a good day!!” said another.

Others could see the family resemblance between the two, saying Sunnie took after her father.

“Spit of a dad,” wrote one. “Proper daddy’s double,” another agreed.

The couple have been together for decades after meeting when they were both just 14, and tied the knot in 2016 at an intimate ceremony in Hampshire.

Their eldest daughter has recently been following in her father’s footsteps by becoming a TV star. Dani was due to appear in ITV2’s Survival Of The Fittest but was forced to quit before the show had barely begun due to a shoulder injury.

She’s also had a few small parts in a number of films and is tipped to be a star of the future.

Danny has often spoken of his love of being a dad and regular shares posts of him spending time with his children on his Instagram page. Recently, he took Sunni to see his football team, West Ham, play.

In another snap of his two youngest playing beside a lake, he wrote: “These baby’s of mine make me feel alive. I strive every day to be a better man. Have a solid Monday (sic).”

These baby’s of mine make me feel alive. I strive every day to be a better man. Have a solid Monday.

Danny previously said while he loves his daughters, he was delighted to also get a son.

He told Channel 4’s Parenting for Idiots: “I couldn’t wait to have a boy because as much as I love my girls with all my heart, I was sick of trying to put a bikini on a Barbie. Honestly, it’s graft, mate.”