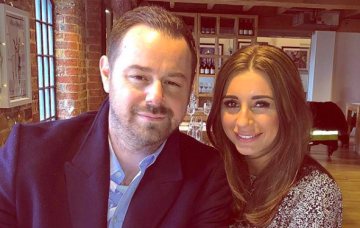 Would you mind your dad calling you this?

EastEnders’ actor Danny Dyer made fans laugh on Friday evening, by posting a picture with his reality star daughter – and calling her “manky” and a “chav”.

Beside a picture with Dani, the TV star wrote: “Out with my Chav with the manky arm. #uplondon”.

His 517,000 followers were divided, with one commenting: “Such a lovely way to talk”.

Another added: “Could not love him more!”

It comes a week after the Cockney dad of three posted a video calling his son, Arty, a “little mug” for playing a computer game without permission.

Shaming his youngest, he told the camera: “That moment when you catch your son playing Grand Theft Auto, which is very naughty, and flying a helicopter!

“I mean it is a liberty, and I will be punishing him for it, won’t I?”

Turning the camera on the cutie, Danny adds: “Little mug, what are you?”

But Danny – who is married to Joanne Mas and also has daughter Sunnie – has been known to show a softer side now and again when it comes to his kids.

After Dani, 22, was forced to leave reality show Survival of the Fittest when she dislocated her shoulder during a challenge, her dad posted an emotional message on Instagram for his “baby girl”.

He wrote: “Live and Let Live baby girl. Taken out by a [bleepy] slide. Don’t think my heart could have taken another 3 weeks of that caper. #proud”.

The barmaid and actress later appeared on Good Morning Britain to say her dad hadn’t really enjoyed her appearance on the hardcore reality show.

She also spoke about rumours she’d be joining the next series of Love Island.

When presenters Richard Madeley, Ranvir Singh, Charlotte Hawkins and Richard Arnold asked about the headlines, she said: “I literally heard about [the rumour] the next day.

“I haven’t planned on going on Love Island, I think it’s a bit too intense for me.

“It’s one of those things really, I don’t think I would be open to doing something like that.”

She added that Danny, 40, wouldn’t be keen, saying: “No, he wouldn’t [like it]. I don’t think he could watch it. You know what I mean? Boys talking about me and stuff.

“So I haven’t made any plans. It’s not a bad rumour though.”

Do you think Dani minds her dad calling her a chav? Leave us a comment on our Facebook page @EntertainmentDailyFix and let us know what you think!