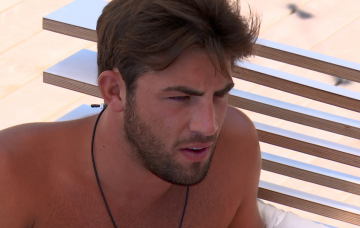 The moment we've all been waiting for

It’s the moment Love Island fans have been waiting for, and tonight Danny Dyer will finally have the “talk” with his daughter’s boyfriend Jack Fincham.

Tonight’s episode of the ITV2 show will see the islander’s loved ones head into the villa – but sadly Danny and his wife Jo Mas aren’t there in person.

Instead, 21-year-old Dani gets to enjoy a video call with her parents after being reunited with her nan and granddad face-to-face.

Read more: Danny Dyer speaks out about Dani and the do bits society

“Oh my God I miss you,” Dani shrieks upon seeing her parents.

EastEnders star Danny, 41, doesn’t waste any time in telling his daughter just how proud he is of her after eight weeks on the reality show.

“No listen, I will say, I got it wrong baby. I told you not to do it. We’re so proud of you, you are incredible. You’re an absolute hero babe,” he says.

However, there’s only one thing Dani’s interested in – her famous dad’s thoughts on her new beau.

Gushing about the pen salesman, Danny goes on to say: “Babe he’s lovely. He’s a proper geezer mate. You’ve found a right proper geezer in there.”

The loved-up contestant then rushes off to find her boyfriend so that he can meet her folks for the very first time.

Although he admits he initially had reservations about the relationship, Danny tells Jack: “Listen, I approve of you mate. I think you’re absolutely bang on. I weren’t at first, I thought ‘oh here we go’.”

The Football Factory actor continues: “Look at him, look at him. Look at his little face. Do you know what Jack, listen. Proper geezer, gotta say. I’ll tell you what I love about you, I love the fact you got a little Derby.

“You got so much charisma. Takes a brave man to bowl into that gaff, them all ‘abbed up’, proper geezer. Honestly mate, we’re so over the moon.”

Understandably, Jack, 26, was over the moon at getting the seal of approval, and later took trip to the Beach Hut to express his relief.

“It’s nerve wracking. The fact that he approves of me and he likes me, I just thought ‘that’s brilliant’. Dani must feel so relieved,” he said.

Jack and girlfriend Dani are strong favourites to win the show and £50,000 when the final airs on Monday night.

Do you think Jack and Dani will win Love Island 2018? Leave us a comment on our Facebook page @EntertainmentDailyFix and let us know what you think!