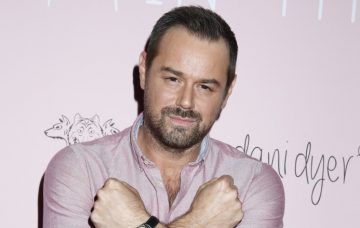 The couple beamed with happiness as they joined Dani, 22, on the red carpet in London to celebrate her new collaboration with In The style.

The happy family outing came after Love Island contestant Dani broke the disappointing news to fans that Danny won’t feature in her upcoming reality show, which will instead focus on her and boyfriend Jack Fincham.

There had been rumours that EastEnders actor Danny would feature in the fly-in-the-wall series, which had been billed as a Kardashians or The Osbournes-style show.

But sadly it’s not meant to be!

Dani told Metro: “Jack and me are filming something for ITVBe at the moment, where we’re being followed around by cameras.

“My family aren’t involved – so there ain’t no big Kardashian type show coming up with the Dyers, sorry to disappoint.

“Don’t think my dad’s ready for that yet!”

Dani herself mentioned the possibility of her dad featuring in a reality show with her just last month, when she told Capital FM’s Breakfast Show there had been discussions over whether it would work.

“It’s the whole family. Oh my god I’m gonna give out some spoilers there! Like the Osbournes. It could possible potentially happen next year, yeah,” she said.

Dani later gave an update to the radio station, saying: “We’ve just sort of started. It’s exciting. It is hard work though, it’s sort of back to all that again, ain’t it? I’m like ‘oh no Dan, here we go again’.

Back in July, Dani’s mum Jo told The Sun’s Bizarre Magazine that they were considering it, but that it would depend on Danny’s existing commitments with EastEnders.

“We’ve been offered a reality show, but Danny is contracted at the BBC,” she said. “We have always joked about it.

Danny has played Mick Carter on BBC’s EastEnders since 2013.

Her range, which comes in sizes 4 to 24, is described as “cosy and autumnal” featuring slogan t-shirts, co-ords and printed dresses.

Are you disappointed Danny won’t appear in Dani’s reality show? Leave us a comment on our Facebook page @EntertainmentDailyFix and let us know what you think!